It's the birthday of Nedra Tyre, born October 6, 1912 in Offerman, Georgia. She was a social worker for most of her life and she used her experiences to create some of the best suspense fiction of the post war era. She produced six novels and over forty short stories, according to Sarah Weinman, crime fiction critic and leading authority on the genre know as Domestic Suspense.

Anthony Boucher referred to her as not just a mystery writer, but a novelist. He said that she "brings to the mystery novel a richness of human warmth, sympathy, and insight comparable to Dorothy Salisbury Davis or Margaret Millar...".

She read voraciously and squeezed her writing in between work and caring for an ailing mother.  In the 1970s she lost her hearing and became absorbed by the charity work she was doing for the poor. Her work fell out of print. She stopped writing. 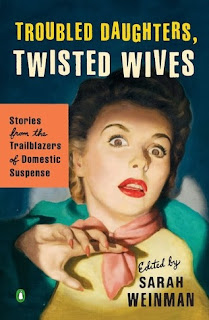 One of her best short stories, A Nice Place To Stay, was republished in 2013 in the critically acclaimed anthology, Troubled Daughters, Twisted Wives, edited by Sarah Weinman. The story examines a woman's struggle to support herself with the menial jobs available to her, and the solace she finds when her final destination gives her a measure of security and stability in a prison cell.

The Independent made her the subject of it's famed Invisible Ink series in December 2014, with No. 254.

"Some of the finest writing ever done has been in mysteries --even your precious Henry James tried them."