Did You Miss This Book When It Came Out? Maybe You Were BLINDSIDED.

Dr. Cadence Lawrence's successful career as a young surgeon takes a wrong turn when she sees Dirk Lyons, an old high school acquaintance in a fellow doctor's office. Her shock and anguish become clear once the reader learns that Dirk was once accused of murdering Cadence's best friend....by Cadence herself. Within days, she's being stalked by him and now fears she may be his next target. Without hard evidence, the police are helpless to protect her, so she flees into the North Woods. In her haste, her car becomes stuck on a side road during a major snowstorm. She faces a chilly death, until a knock on her car window by a stranger offers her hope for survival. Having just fled the horror of a suspected killer, can she trust the offer of shelter in a storm from a total stranger? 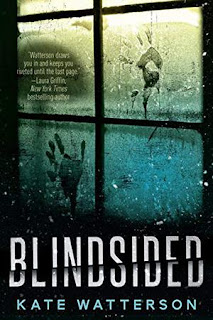 Thus begins this thriller by Kate Watterson, a terrifying tale that almost feels like a romance novel once Cadence settles in with her rescuer in a snow bound cabin, cooks for him, chats, and begins to fall in love with this tall stranger with a chiseled jaw, his own construction company and some really good wine!
OK, I admit a good wine will catch my attention as well, but the tale soon moves from the improbable to the absolute terrifying as Cassandra decides to return to her hometown and confront her stalker. She's accompanied by Mick, the man who couldn't turn his back on a stranded motorist in a snowstorm (and begins to like his decision on a personal level).
The author interrupts the storyline several times by shifting the point of view to give the reader a glimpse into the mind of the killer. This is what kept me reading, and it will keep you reading as well, assuming you're not too scared to turn the page as the true malevolence of this skilled predator is unveiled.
Posted by Picks by Pat at 8:08 PM No comments:

If a poor little rich girl is kidnapped in the woods, does anyone hear it? THE GIRL WHO CRIED WOLF by Robert Ferrigno

This thriller tackles some of the usual suspects…fast paced action, a dedicated protagonist, and the threat of widespread destruction and death. It adds another underused theme by its emphasis on eco-terrorism. When the daughter of a wealthy capitalist is kidnapped, the ransom demand includes turning 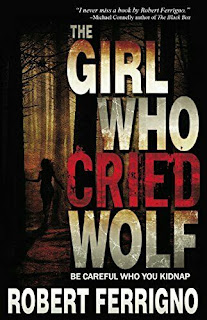 over an old growth forest to a conservation group, which will save it from clear-cutting by ruthless loggers…or so we are told. Remy Brandt, the victim, has a history of making false claims, which complicates the case. It seems the police and the FBI have a hard time believing she’s actually been kidnapped. Her wealthy father doesn’t seem to be in any hurry to rescue her, which adds to the problem. Remy’s boyfriend has no doubts however, and his skills as a security expert and determination to find Remy make him a powerful ally…perhaps Remy’s only ally.

The villains are part of an underground network of ecological misfits and tree huggers who cross the line from peaceful protest into violence. The leader of the kidnappers, Glenn, has more than saving the earth on his mind. Greed dominates his mind. His partners, Eli and Tree, are faithful followers who begin to doubt the wisdom of this crime as time passes. Each of them has their own personal motives for aiding Glenn. Eli begins to fall in love with Remy, while Tree loves only the woods, especially the forest where they’ve hidden Remy. Tree may be the most interesting character. He appears to be a brute, but we learn that he was once a foreman on a lumberjack team, until he heard screams in the forest…the screams of the trees being destroyed, and turned against capitalism.

As Mack, Remy’s boyfriend, scours the Seattle underground looking for clues, he grapples with Glenn and then Cleo, journalist for an underground newspaper who offers to help him. But Cleo has secrets of her own and may not be the ally Mack has hoped for. As the ransom deadline draws near Mack, Remy, the kidnappers, and Cleo collide. The reader will find it hard to put this book down until the violent ending.