Edgar Allen Poe Gets his own Postage Stamp

The US Post Office has announced they will issue a stamp in honor of Edgar Allen Poe on the anniversary of his birth 200 years ago. The stamp will be issued on January 16, 2009, in Richmond, Virginia.

The portrait was done by Michael J Deas. Here's a sneak peek at the stamp. Well done, and long overdue. 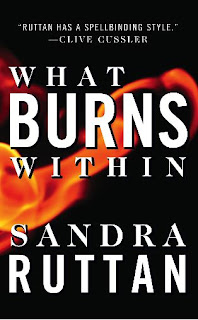 Most Americans, if they think of Canada at all, think of hockey, Niagara Falls or the Maple Leaf. The idea that Canadian culture or literature is anything other than an pastel imitation of Americana (soft-boiled at that) can be laid to rest. Sandra Ruttan demonstrates with her novel What Burns Within that Canadian crime fiction deserves to be taken seriously. As gritty as the best American crime writers working today, Sandra presents fiction that deals with horrendous crimes without exploiting the victims for cheap thrills. If you prefer cozies, she's not for you, but if you're a fan of tough crime fiction with well-developed characters, climb aboard. But bring along a fire extinguisher.

The plot centers around three police officers in British Columbia who worked on a case involving a brutal crime that nearly destroyed all of their careers. Now, they are drawn together a year later by different cases that gradually appear to be linked. One is a series of arsons, another a set of child kidnappings that stir bitter memories for the investigators. On top of that, a serial rapist is stalking the area, and seems to be targeting the wives & girlfriends of fireman and even the police who are responding to the arsons. The climate of fear and suspicion created by these crimes elevates the level of suspense, since the inside knowledge suggests that someone known to the victims may be involved.

Throughout the novel, several characters who at first appear to be cookie cutter caricatures turn out to have complex motives and flaws. By showing these, Sandra enrichs the story (I'm thinking particularly of Officer Tain, who is not quite the male chauvinist he pretends to be). Not only does Sandra tackle the crimes in a traditional police procedural format, she also explores the social fabric of police work between male and female officers, giving us a glimpse of a world that few ordinary civilians get to see.

Not since I read Garry Disher's "The Dragon Man" have I read an author who spends so much time developing her characters, with both their redeeming features and personality warts. It's a technique that succeeds very well. Pick up a copy of "What Burns Within", and do it soon. Sandra has a sequel coming out next month. If it's anything like this gem, it will be worth reading as well.