The Soak - They Don't Write 'Em Like This Anymore 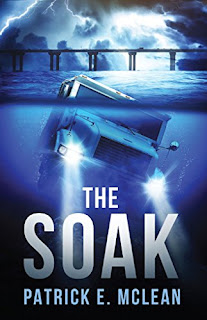 Hobbs is a career criminal and a dying breed, much like the classic heist story portrayed in Patrick McLean's latest novel, The Soak. A master at the game of robbery and with a long string of successful jobs behind him, Hobbs is considering retirement. He's approaches every job as a professional, using methodical planning and patience to make the score. His skill at taking out armored cars is so good, the companies have changed their procedures just to deal with him.

But the world has changed. People and money move too fast in today's world. Strictly a blue collar criminal, he doesn't have the computer skills to steal electronically. Hobbs doesn't even own a smart phone. Perhaps it's time to hang up the six shooter and settle into a life of retirement, like the poor saps he sees punching a time clock. He knows it's inevitable, but it's killing him.

Then along comes Alan. He's everything Hobbs isn't. Computer savvy, a millennial with fine clothes, a college education and youth. Especially youth. Hobbs can't decide if he wants to take him on for one final heist or punch him in the mouth. But he sees something in the young lad, and takes him under his wing. He begins to teach Alan everything he knows about pulling a big heist. And he learns a few things...like having a computer wiz on your crew can be a good thing. After all, it's Alan who brings Hobbs the idea for hitting an armored car along the western pennisula of Florida, where the isolated roads and far flung towns present plenty of spots to ambush 23 millions dollars carried by a pair of low paid rent-a-cops.

Not everything goes as planned however. It's one thing to ambush an amorned car (and when it goes down, it's a thing of beauty to watch). It's another thing to get away with the loot and Hobbs has not only an FBI agent with questionable ethics on his tail, but a Category 2 hurricane bearing down on Florida at just the wrong time. If Hobbs can pull this off, he may just be able to retire for good.

You'll be rooting for Hobbs the more you read, and this book is a great read to the end. The writing isn't flowery but it packs a punch:

"Mazerick and the uniform turned to see a woman in a dark-blue suit. Mazerick immediately thought, Naughty librarian. And a split second after that, he thought, There goes that sensitivity training the city paid for...Agent Wellsley smiled. Mazerick liked it."

You'll like it too. The Soak, I mean. What did you think I was referring to, the Naughty librarian? You've got a dirty mind. Enjoy it.
Posted by Picks by Pat at 12:21 PM 2 comments: