WHAT CAN YOU DO WITH A PHILOSOPHY DEGREE? ASK BEN.

In a few months a new batch of college grads join the job search, and a new batch of news articles with job hunting advice hits the newsstands. Lists are hot, including lists of which college degrees are 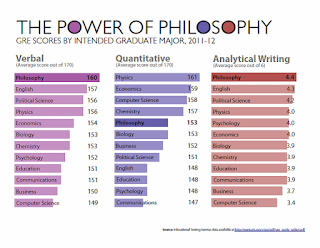 hot...and which are not. In the latter category, time and again, a degree in Philosophy gets low marks (this is ironic, as we're still recovering from the greed driven housing crisis and TRILLION dollar banking scandals of 2008). Even politicians have chimed in with the advice that we need "less philosophers."

Oh really? Philosophy and the study of great ethical questions, so the advice goes, is a dead end, job-wise. But is that true? And should it be? What can you do with a Philosophy degree, anyway (other than seize the moral high ground)?

Well, you could write a novel. Not a surprise. But maybe you decide a career as a novelist isn't for you, a lover of books.

You could...start a publishing house. Hire a young editor who also loves books and has a keen eye for story. You could publish some good books, and some great books. Go to the annual MWA awards dinner with, not one, but three of your authors, because they've been nominated for the Edgar Award that year. Earn the respect and admiration of publishers, readers and writers. Then you could sell your publishing business. Then you could start another one, and publish more great books with more great stories. Yeah, you could do all that...with a philosophy degree.

That someone was Benjamin LeRoy, founder and current publisher of Tyrus Books, and the founder of Bleak House Books. In 2007, I first discovered Ben while looking at small independent publishers to whom I might peddle my un-agented manuscript. He was doing these podcasts, discussing the publishing world, interviewing writers and readers, and having some entertaining discussions. To my knowledge, no other small publisher was doing this, and it was pretty exciting. I learned a lot about submitting my work from those podcasts. And when I started reading some of his books I was very impressed.

I wasn't the only one. At the 2008 Edgar Awards, Bleak House Books had three authors up for nominations; one each in the category of Best Novel (Reed Coleman’s Soul Patch), Best First Novel (Craig McDonald’s Head Games), and Best Short Story (Stuart Kaminsky in Chicago Blues). For a small publisher, I doubt if this had ever been done before, or since.

If you like great stories and are looking for something new to read, check out the selection from this eclectic publishing house. He has an incredibly deep bullpen of talented writers. You'll find something here you like, whether you're a fan of cozies, noir, or just want something different. Some of my favorites are Victoria Houston, Michael Lister and Mary Logue. If you're undecided, pick up Between The Dark and the Daylight. This excellent collection has some of the biggest names in crime fiction.

Ben Leroy isn't resting on his accomplishments. He's started a charity to make the world a better place called Be Local Everywhere. Check out the video below to hear Ben talk about this project.

So, what are your plans for the rest of your life?