In The Dismal Swamp. Was It An Accident...Or Was It Murder? 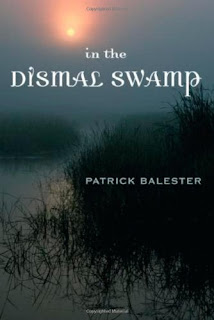 Thomas and Mercer, has announced that my mystery novel, In The Dismal Swamp, is being promoted via their Select Mystery, Thriller & Suspense Kindle books for $0.99 each!  Don't miss this chance to read it. Sale runs through June 30th.


Believable dialogue, an engaging hero, and lots of Virginia backcountry ambience suggest a strong series in the offing from this talented first novelist. -- Booklist
Posted by Picks by Pat at 10:53 AM No comments:

Email ThisBlogThis!Share to TwitterShare to FacebookShare to Pinterest
Labels: In The Dismal Swamp, Patrick Balester 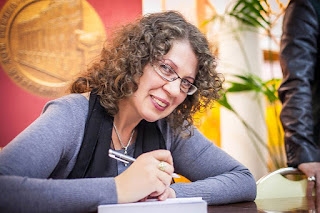 It's the birthday of Russian crime novelist Alexandra Marinina, born June 16, 1957 in Ukraine. Hers was a family of lawyers and she followed in those footsteps, earning her law degree in 1979. Her first novel, Confluence of Circumstances, was published in 1993. She studied criminal behavior in the Ministry of Internal Affairs as a police officer until 1998, when she turned to writing full time.

Most of her detective novels are considered cozies written in the traditional European method of the crime as a logical puzzle to be solved by intellect rather than brute force or physical prowess. Her protagonist is a female detective named Anastasia Kamenskaia. In describing her heroine, the author has compared her a "computer with two legs", and a "gray mouse" unconcerned with makeup or appearance. He only passion is to solve crimes. Coffee and cigarettes are her constant fuel, and some of her colleagues describe her in unflattering terms. "She just sits in her warm office sipping coffee and pretends she's the great Nero Wolfe!". But she is extremely skilled at her work. 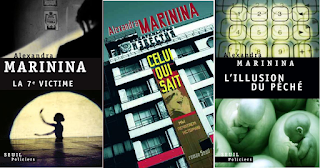 Alexandra began to write in 1991 out of boredom. Her knowledge of criminal behavior found an outlet that was far more interesting than the official reports she produced for the Ministry of Internal Affairs. The editors at Militsia, a magazine produced by the Ministry, published one of her first stories and encouraged her writing.

Called the "Russian Agatha Christie", she has won several awards and was named Writer of the Year in 1998 by the Moscow International Book Fair. Her books have sold more than 45 million copies and have been translated into 20 languages. Sadly, there are almost no English translations of her detective novels.

https://www.lecourrierderussie.com/culture/2016/06/alexandra-marinina-crime/
Posted by Picks by Pat at 1:40 PM No comments: