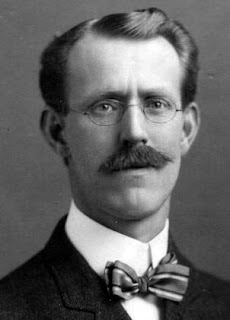 It's the birthday of Edward Stratemeyer, born October 4, 1862 in Elizabeth, New Jersey. The youngest of six children, he grew up in a family of hard-working immigrants. But he preferred to spend his time reading the Horatio Alger Rags-To-Riches stories. Soon he started writing stories for his friends. His father thought Edward was wasting his time. But he sold his first story at the age of 26 to a popular boy's magazine for $75.00 (over $1,940.00 in today's dollars). When he showed the check to his father, the elder Stratemeyer replied "You'd better write a lot more for them."

And write he did. Most of his stories were geared toward the children and young boys market, and he produced numerous stories with titles such as "Dashing Dave, the Every Ready Detective." He went to work for Horatio Alger, his boyhood hero, and even completed some stories for the ailing author (they split the royalties as per their agreement). 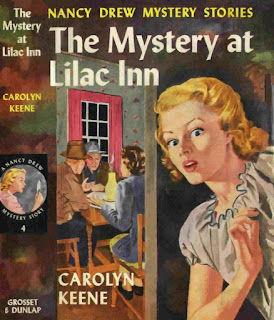 As public education took hold in America, it produced millions of new educated readers, and printing advances made the dime novel a reality. Stratemeyer wrote dozens of novels. His series about three schoolboys and their adventures, The Rover Boys, was a big success. But he could not keep up with the demand for stories. He decided to launch a company, and called it The Stratemeyer Syndicate. He hired writers to produced novels based on plots that he would dictate, and had the writers use a pen name that was owned by the company (in case a writer of a successful series left, the author's name would stay behind). He even created fake biographies for his ghost writers.

During the roaring 20s Stratemeyer thought mystery stories would broaden the company's reach from adventure and success stories. He created two of the most popular children's series of the 20th century. In 1926 he created The Hardy Boys. He followed up this successful series with another geared towards the growing market for female readers. Thus was born Nancy Drew. 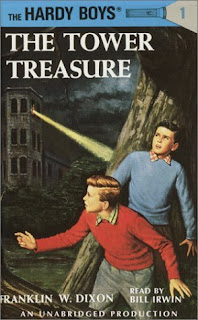 These stories followed an outline created by Stratemeyer and he required they contain certain standard features, such as cliffhangers at the end of each chapter. Characters rarely "said" anything...instead they "cried", "exclaimed", or "declared". But readers gobbled them up.

To date, The Hardy Boys and Nancy Drew series have sold over 100 million copies. Even today, they sell millions of books each year and have admirers among many of today's crime writers. Both Sara Paretsky and Nancy Pickard have credited Nancy Drew stories in part with inspiring their interest in mystery writing.

You have my personal thanks, Mr. Stratemeyer.