I WON'T BACK DOWN from recommending this thriller.

J.D. Rhoades has written six books in the Jack Keller series, and this is the latest one. It's also the first one I've read, and now I want to read them all. Keller's come to North Carolina to try to reconnect with his son, and possible rekindle a romance. The story hints at some grave harm that Jack did to his boy, some act of violence that saved him, but also scarred him.

In the novels first chapter Jack defends some new immigrants at the local school, refugees from the Iraq war. Soon he's hired as their bodyguard by the father, an ex-police officer who fled the country and was given a new identity. But he may not have fled with just his children. There are an awful lot of people who seem to have an interest in this family. I could be military information they want, someone seeking revenge for a past wrong, or a far more simple motive...money. It's no secret that the United States poured hundreds of millions of dollars into Iraq after the war to rebuild it, and a lot of that cash (yes, cash) simply disappeared. Could some of that money be here? 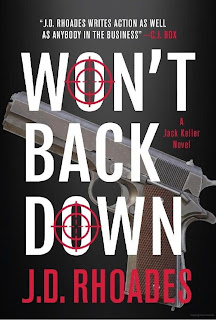 Keller finds himself defending the children not just from schoolyard bullies and redneck bigots, but ruthless assassins and even some federal agents who may not have the refugees' best interests at heart. As a man with a rap sheet, Jack Keller also has to be careful not to attract the attention of law enforcement. This proves to be a difficult task once the shooting starts.

There are a lot of characters jumping into the narrative with different motives behind each character.  Rhoades has a nifty technique to keep the reader from getting lost. He keeps many of the chapters short, sometimes just two or three pages. This helps pack a lot of information into the story, which is good, because the action starts early and never lets up. I liked it. You will too.

By now most of you know that Angela Lansbury has passed away. As she leaves us, a generation of television viewers who grew up on her portrayal of Jessica Fletcher in the mystery series Murder, She Wrote, pause to reflect on her legacy. For many, her TV stardom was the first introduction to this versatile actress. But her acting career spanned an incredible eight decades.

She made her first movie appearance in 1944 in the suspense film Gaslight. This earned her an Academy Award nomination for her sinister performance. In 2014, she made her last acting appearance in Noel Coward's comedy play Blithe Spirit as Madam Arcati, a spiritual guide and potential huckster.

I've seen most of Angela's roles over the years. Her portrayal of Eleanor Iselin in The Manchurian Candidate is a personal favorite. But her influence on my writing has a direct link to the success of her portrayal of a widowed amateur sleuth from the small town of Cabot Cove, Maine.

While still working on the first draft of In The Dismal Swamp, I decided to target the cozy mystery market. I didn't have an agent, and at the time, most of the publishers who I thought might work with me were focused on the cozy. It was then that I realized that I didn't know exactly what a cozy was...I just had a vague idea. Then someone (an agent?) mentioned Murder, She Wrote. "You want cozy? Jessica Fletcher's cozy!"

That's when I understood. I'd watched MSW for years and the successful formula of minimal violence, the absence of cuss words and quaint settings made sense for my manuscript. The basic structure was the same, whether it was film, television or printed fiction. And the rules for cozy are pretty strict. At one point, my editor suggested (strongly) that I remove the word "piss" from my manuscript, as it wouldn't pass muster.

Naturally I complied. It wasn't a big issue for me, but it did teach me an important lesson. You need to target your audience. It my case, it was a cozy publisher, and I eventually found one in Avalon Books of New York (which was later purchased by Thomas & Mercer).

Since then I've moved onto different sub-genres of the mystery novel. My current WIP is a heist novel, and you can bet I won't be pitching it to The Hallmark Channel. But I won't forget the lessons I learned from Angela Lansbury.

If you're a fan of cozy mysteries, you can purchase my novel using the link in the blog post above. I also recommend Nancy Cohen, Agatha Christie, Edith Maxwell, and Eva Gates.