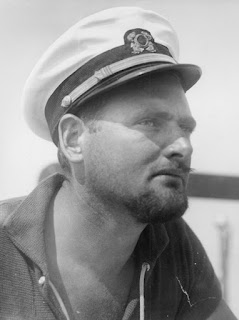 It;s the birthday of Lester Dent, born October 12, 1904 in La Plata, Missouri. He wrote over 150 novels for the pulp magazine trade which flourished in the 1930s and 40s, but he is almost unknown today. Most of his novels were written under the name Kenneth Robeson, the pen name owned
by the publisher.

His formative years were spent in Wyoming. His father was a rancher and "a chronic pioneer", according to Dent. He was educated in a one room schoolhouse. Lack of friends and close neighbors prompted him to develop the wild imagination that would serve him so well in later years. The family returned to Missouri in 1918, where Dent went to college. He then moved to Oklahoma for a job and got married. Inspired by a friend who had a story published in one of the popular pulp magazines, he began to write. After publishing several stories he was contracted to write for Street and Smith Publications, where he spent much of his career writing the Doc Savage novels.

Technology fascinated his curious mind, and he was constantly taking classes to better himself. He acquired both his radio operator and pilot license. His enthusiasm for travel prompted him to buy a boat so he could learn to sail, and his used this knowledge to sail up and down the East Coast. He searched for sunken treasure in the Caribbean and prospected for gold in the Southwest. His travels earned him membership in The Explorer's Club, a professional organization dedicated to field research and the advancement of scientific knowledge. 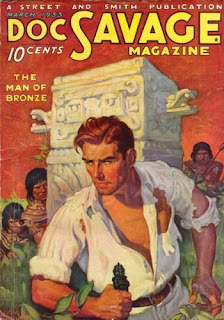 All of this served to fuel his writing, and his novels with the character Doc Savage were immensely popular in the 1930's. Doc Savage was a scientist and adventurer who was capable of almost super human feats of endurance and intelligence. Dent described him as "a cross between “Sherlock Holmes with his deducting ability, Tarzan of the Apes with his towering physique and muscular ability, Craig Kennedy with his scientific knowledge, and Abraham Lincoln with his Christliness.” There is evidence that Dent's character may have been the inspiration for Steven Spielberg's globe trotting adventurer Indiana Jones.

The need to write quickly for the pulp market lead to the creation of a set of rules for fiction writing, which Dent called The Lester Dent Pulp Paper Master Fiction Plot. Even after 70 + years, the advise in this list holds up well, and includes several gems, such as this:

A different murder method could be--different. Thinking of shooting, knifing, hydrocyanic, garroting, poison needles, scorpions, a few others, and writing them on paper gets them where they may suggest something. Scorpions and their poison bite? Maybe mosquitos or flies treated with deadly germs?

A little less exotic, but just as useful, are the rules for the first quarter part of every successful story.

1--First line, or as near thereto as possible, introduce the hero and swat him with a fistful of trouble. Hint at a mystery, a menace or a problem to be solved--something the hero has to cope with.

2--The hero pitches in to cope with his fistful of trouble. (He tries to fathom the mystery, defeat the menace, or solve the problem.)

3--Introduce ALL the other characters as soon as possible. Bring them on in action.

Lester Dent's work has become a bit more accessible in the last few years. Many of the Doc Savage novels are now available on Kindle.

Hard Case Crime published one of Dent's works for the first time ever in 2009, Honey In His Mouth.

And Mysterious Press has published several of Dent's mystery novels in the past few years, including Lady In Peril and Cry At Dusk.