I was looking for something to read on an upcoming flight when I picked up "Blue Heaven" by CJ Box a few weeks ago. Finding something to pass the time in airports is crucial to maintaining sanity and avoiding boredom.

The story revolves around two young children, brother and sister, and an unlikely hero, a rancher who has a damaged relationship with his own son and who's facing foreclosure on a property that has been in his family for generations.

When the youngsters witness a murder while on a fishing trip, they are plunged into a desperate game of hide and seek that could cost them their lives. As the three killers pursue them, the children find refuge in the barn of the rancher, Jess Rawlins. Jess listens to their incredible tale of flight, and then makes a difficult decision to harbor them from the authorities, despite some misgivings about their unbelievable story. Perhaps it's a desire to amend for his own damaged relationship with his family, but Jess wants to believe these kids.

The novel includes an appearance by an ex-detective who can't let go of an unsolved robbery-murder case he worked for years, and which turns out to be crucial to understanding the peril faced by the kids, Annie & William. Additional characters, such as the town banker and the children's mother, enrich the plot. It seems that past history, even the history that some characters want to forget, are influencing the present, and may lead to murder, if the bad guys have their way.

This novel examines a classic theme that has been used successfully in numerous suspense/thriller stories, from Alfred Hitchcock to Patricia Carlon. A man (or woman) who struggles alone against seemingly insurmountable odds, but keeps on fighting. CJ Box has put a new spin on the theme, and it gave this reader a hell of a ride.
Posted by Picks by Pat at 12:40 AM No comments:

Happy Birthday Dashiell Hammett! (among others)

Today is the birthday of Dashiell Hammett, the father of the noir mystery novel and author of The Thin Man and The Maltese Falcon.

Also born today was Vincent Price, actor whose stage and movie performances will be forever linked with Edgar Allen Poe.

Happy Birthday, gentlemen. Thanks for your work.
Posted by Picks by Pat at 2:17 PM 1 comment:

101 Things to Do Before You Die...for mystery writers (a work in progress)

It seems these type of lists were red hot for a while, in many categories, like travel and dining. I thought I'd give a stab at making my own list, in no particular order. I'm up to 30 items, so it's by no means complete. Some of the entries were written with tongue in cheek, but I hope you enjoy them. If you have an idea for additions, I'm open to suggestions, and credit will be given for any I add.

101 Things to Do before You Die (for mystery writers)

Don't Be AFRAID to Read This Book! 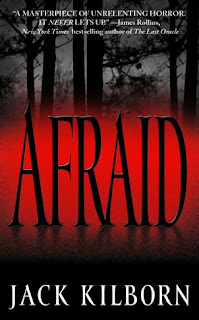 I've read my share of mediocre novels with half-developed characters and a weak plot.

This isn’t one of them.

AFRAID, by Jack Kilborn, starts out with a quiet evening of fishing on a small town lake. It quickly turns deadly for the residents of Safe Haven. A helicopter carrying a secret army special ops force crashes at the edge of town. Soon people are sliced and diced faster than you can say shish-kabob.

As the body count climbs, Sheriff Streng must confront five of the deadliest killers he has ever encountered. And the more he learns, the more he suspects that the helicopter crash may not have been an accident. What’s more, the men hunting him aren’t just killing to get their kicks (much as they enjoy their work). They’re after something…or someone.

The sheriff gets some valuable assistance from a young fireman (Josh) and a single mom (Fran), who help track down the killers. There’s a surprising boost to the story from Duncan, Fran’s 12 year old son, who responds to the horror around him with a courage that escapes most of the adults in the novel.

The villains are more than just stereotypes. Kilborn takes the trouble to get into their minds to show us why they do the things they do. We also get a wonderfully delicious ending that left me cheering for more.

AFRAID will keep you up tonight, so don’t forget to lock your doors and bolt the windows. And don’t be afraid…be very AFRAID.
Posted by Picks by Pat at 5:12 PM No comments:

Exploring the Limits of DNA Profiling

This actually sounds a lot like an episode of Law & Order. Two men suspected in a jewelry theft have been freed because the DNA could not be linked conclusively to one or the other.

The problem? The men are identical twins. This doesn't even touch on the growing problem of faulty test results and understaffed crime labs around the country, but it's fascinating in its own way.

Read more about it here:

Under the heading "Protect Your Witness"

This is probably good advice for any DA who wants to secure the assistance of a witness against a murder suspect.

Don't put your witness in the same cell as the guy he testifies against. Maybe it's just me, but that seems like a no brainer.

Check this link out to see exactly what I mean.

As Facebook and Myspace begin to clamp down of criminals who target their victims through the computer, a new threat is emerging. Predators are getting to their victims via cell phones. This ominous bit of news, from the Howard Scripp News Service, should frighten parents who think nothing of giving a twelve year-old a cell phone but wouldn't dream of letting them on a computer unattended.

Check out the following link to read more:

Get out of Jail...by reading?

A creative way to reduce taxpayer expense on new prisons may have been found. Judges are starting to sentence minor offendors to read a book, in order to avoid jail time. A bit unusual, but I have to say that I like the idea, as long as we don't offer this to persons who have been convicted of violent offenses. And a preliminary study shows that participants repeated their crimes only half as often as non-participants (granted, it was a small study).

It's worth a try, considering we have almost three million Americans in prison. What do you think? You can read the article at the NYT link below, then decide for yourself.

The New York Times has created a slideshow to celebrate the 200th Anniversary of his birth, and it's well worth looking over. Most of the images come from the Berg Collection of the New York Public Library. Who knew that New York had such an amazing collection? Perhaps they deserve a piece of Poe.

Check it out here: