Double Wide Is A Triple Threat To Reader Boredom 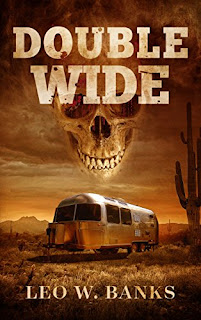 When a story opens with a dismembered human hand, the reader and the protagonist both know that trouble lies ahead. There's something else that lies in wait for the reader...a great story with a narrator who has a wry, understated sense of humor and a strong desire to seek justice for the death of a close friend.

Double Wide, by Leo W. Banks, is a simple story well told. The narrator, Prospero Stark, is a former major league star pitcher fallen on hard times. He runs a trailer park populated by a collection of characters you'd expect to find in a David Goodis novel, with one important difference. They're down on their luck, but not desperate. Indeed, they often have more faith in Stark than he has in himself. With their help, and some assistance from a ruthless TV reporter who is hungry for a good story, Stark uncovers a scheme by a famous baseball agent to break the rules for his prospects.

It's a con that worth millions of dollars, and could be the key to learning what happened to Stark's friend, who was a promising catcher until he disappeared. Whoever left that hand for Stark to find wanted to reveal the truth, but now that witness is dead, murdered by Mexican drug runners. Stark has just one shot to break open the case, if he can face some personal demons, get back on the pitching mound and prove he still has the power to face down a batter. He still has the name recognition from his glory days, but it may not be enough if his arm can't back it up.

Leo Banks paints a vivid portrait of the southwest that would impress Georgia O'Keeffe. The setting and the characters are absorbing. It's a gripping tale of friendship, the things we lose as we age, and the redemption we gain when we face our worst fears. That's a lot to pack into 352 pages. And you may not notice all that because you're too busy turning the pages, engrossed in the story. But later, when you're done, you'll wake up in the middle of the night and mutter under your breath, "Wow." Then you'll reach for the book, because you'll want to read it again.