Book your next vacation to Gangster Nation 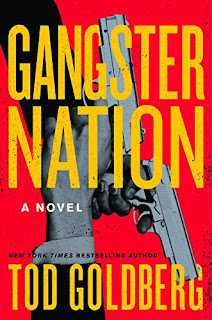 Sal Cupertine, a mob hit man, screws up and kills some FBI agents by mistake. Now every cop in the country is looking for him. There's no way out, right? So naturally, he does the only thing left to do...he heads for Las Vegas, gets some plastic surgery and takes on a new role as...a Rabbi?

This is the implausible premise behind Gangster Nation, by Tod Goldberg. Hard to believe? But then I read the book. And somehow, by hook or by crook (or by some damn fine writing) he makes it work. Meet Sal Cupertine, aka Rabbi David Cohen. With the help of another Rabbi with ties to the mob, he gets a gig at a synagogue and school in Vegas. It's appropriate since Vegas is the city where nothing is real. Sal fits in by hiding behind the glitter and polish.

When he's not dispensing advice from the Torah to his congregation, he's helping to dispose of rival gang members at the local cemetery, and making a fast buck at the same time. His long term plan is to reunite with his wife and son once the heat cools down. That may take a while, seeing that the reward for his capture is a half million bucks. While he waits and stashes cash in several safety deposit boxes in town, we learn his background and begin to understand what made him the killer he is. As a kid, he sees his father tossed out of the window of a skyscraper and splatter on the pavement. Who wouldn't be traumatized by that? His brother heads a crime syndicate in Chicago, so Sal enters the family business.

But he's had enough. He doesn't want the same future for his own son. Soon, he'll have enough money to make his escape, maybe to South America. But then, Sal makes a mistake. He kills a woman who'll be missed, and comes to regret it. Not only was she not the threat he suspected, her death alerts an ex-FBI agent who was the partner of one of Sal's victims. As Sal, aka Rabbi Cohen, prepares to go under the knife once more to rebuild his botched plastic surgery, an accumulation of bad decisions by him and his family threaten to expose his secrets. The writer doesn't reveal the shocking conclusion until the very last line.

Tod Goldberg is a craftsman from the old school, a man who knows how to tell a story. He makes you sympathize with a main character who has killed dozens of people, which is not an easy task. As a writer, I'm still trying to figure out how he does that. But don't concern yourself with my problems. Just buy his book. It would be a crime not to read it.
Posted by Picks by Pat at 12:12 AM No comments: