Hail Storme is a Pounding Thriller 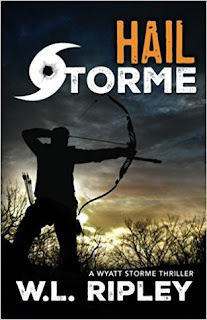 Ex-NFL player Wyatt Storme is bow hunting in Missouri when he stumbles across a huge marijuana field in the middle of the woods. He manages to subdue the guard dog and it's handler, but his discovery sets off a chain of disasters that Wyatt feels compelled to put right. The sheriff he alerts is shot dead the next day, and other people drawn into the investigation face danger from a drug conspiracy far bigger than just a few dozen acres of illicit weed. In the rural town of Paradise, some powerful businessmen have plans to mass produce a new drug called Dreamsicle that will make the crack epidemic of the 1980s look like a cozy tea party. Wyatt is determined to stop them before everyone he cares about is killed.

He teams up with Charles (Chick) Easton, a bounty hunter who's after the chemist who has concocted this new drug. Both men are Vietnam veterans and have seen more than their share of killing. They quickly bond as only battle hardened soldiers can. As Wyatt puts it, "He would be difficult to avoid liking." I liked him. You will, too. In fact, Chick is so likeable, he steals the scene in several chapters. Perhaps the author will give Easton his own series someday.

In the meantime, check out Hail Storme.  It has snappy dialogue and a story that keeps the pages turning. It's a great start to a excellent series, by W. L. Ripley.
Posted by Picks by Pat at 1:25 PM 2 comments: