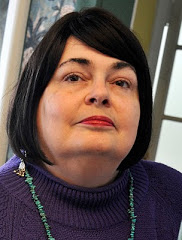 It features a Cherokee police chief named Marquitta "Skeet" Bannion who leaves her career in a big metropolitan police force for a small town. She soon finds herself embroiled in a murder on a college campus and tangling with some pretty powerful people who don't appreciate her efforts. 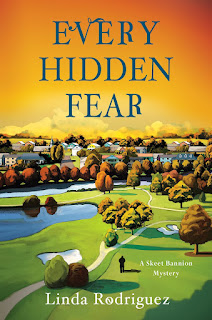 Linda has published two more novels in this highly acclaimed series, including Every Broken Trust and Every Hidden Fear.

In addition to the Malice Domestic Award, she has won the ArtsKC (Kansas City) Fund Inspiration Award, an Elvira Cordero Cisneros Award, and a Midwest Voices and Visions Award. Linda has also served as President of the Sisters In Crime Border Chapter and Vice-President of the Latino Writer's Collective.

Her poems, including The Sun Grows In Your Smile, have been read by Garrison Keillor on The Writer's Almanac. They appeared in her poetry collection, Heart's Migration. You can listen to them here.
Posted by Picks by Pat at 10:16 PM

Thank you, thank you, Pat! So very kind of you! xoxoxo

Thank you for writing about Linda Rodriguez and her many works! I have finished her first two mysteries and am looking forward to the last, and I often teach her works in my literature classes. Many of the college students relate to her works, and that is greatly important to me, for it often leads them to want to learn more.

Also, thank you for posting the links to the podcasts. Though I have read these two poems that Garrison Keillor chose, I did not hear them in his voice until just a few minutes ago. What a treat to hear them in his voice. Reading them before, I had "heard' a female voice coming through; this new but familiar voice added nuances that I enjoyed.