Twist Phelan Hits The Bullseye with THE TARGET

What would you do to prove your father's innocence? How far you you go to clear the name of the man who raised you after accusations of embezzlement destroy both of your lives and lead to your dad's suicide?

Would you lie to your boss? Steal from your employer? Betray the woman you love? All three? 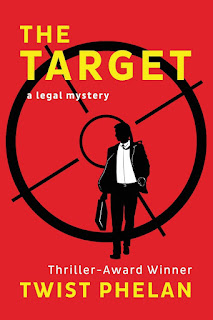 Sean Dwyer is about to find out. It's been several years since his life was turned upside down by a Securities and Exchange Commission investigation into his father's financial firm. For those of you not in the know, the SEC is Wall Street's version of Darth Vader, feared by every stock broker and financial advisor in the country. A letter from them can tank a company's stock price faster than you can say "No Luke, I Am Your Father!" For Sean, it's goodbye Ivy League law school, goodbye dad, and goodbye to the only girl he ever loved. But a few years later, he stumbles into a chance to work for the very government organization that ruined his life, and he grabs it. In his mind, Sean sees a chance to reopen the investigation into his father's crimes, and perhaps clear his family name.

His new boss hates him. The second person he meets at his job just happens to be the woman he dumped. And the case files on his father's firm are locked behind a door secured by a keypad with 10,000 possible combinations.

Well... they might be larger than "minor" problems. OK, OK, I admit they're massive obstacles on par with Frodo's journey to Mordor to destroy the One Ring. Don't look at me like that. I didn't write the thing!

Frankly, at times I wish I had. This story is good...really good. But I'm not jealous. Really.

The fun in reading this thriller is seeing how Sean overcomes these challenges. One of his best weapons is a tech wiz named Frankie, a girl with fabulous hacking and hardware skills. When not helping Sean break into a secure room at the SEC, she imagines herself to be a Samurai Princess, defeating imaginary enemies, and sometimes, real enemies...like Sean's ex-girlfriend. You see, Frankie's in love with Sean, and she is mighty miffed at seeing Sean reconnect with his former love.

As for Sean, he has some serious decisions to confront once he gains access to his father's files. How can he makes things right without getting fired or tossed into jail, and who can he trust? He's so determined to find out if his father really is innocent he ignores the biggest problem that sits right in front of him...if his dad was innocent, someone must have framed him. And that someone will not look kindly on Sean's efforts to learn the truth.

This story works on so many levels. It's a mystery (and a locked room mystery at that), a romance, and a thriller. There's something here for everyone. So if you love to read and you're looking for something new, stop reading my review and buy this book!

As for me, I have my own mystery to solve, mainly, how did Twist write such a fabulous novel? Maybe if I ask her nice, she'll spill the secret. Wish me luck.

A former attorney, Twist Phelan travels, writes thrillers, and short stories. Besides her latest thriller, she's been on fire, having several stories accepted for publication in Ellery Queen Mystery Magazine. Follow her on Twitter and Facebook.

Pat! I am so glad you enjoyed THE TARGET. Thank you for a lovely review!