Once You Start Reading BRING HER HOME, You Won't Leave The House.

Writer David Bell invites us to witness every father's worst fears with this nail chewing thriller. Two years after his wife dies in an accident, Bill Price and his teen daughter, Summer, are battling to maintain their fractured lives. But when Summer and her closest friend go out, what begins as a normal weekend turns into a nightmare. Both girls disappear and Bill will stop at nothing to find out what happened. Along the way, he'll learn secrets that will make him doubt his ability as a parent, and force him confront what kind of husband he was to his wife. 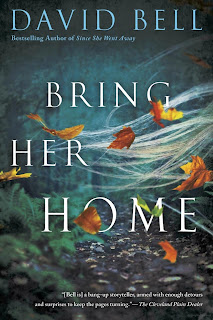 Desperate to assist in the search, Bill barges into hospital rooms, schools and public parks. He's sometimes his own worst enemy as he ignores pleas from the police to let them investigate without his interference. At one point, his quick temper leads the police to put him on the list of suspects. But the reader is hard pressed to blame him as he staggers between grief and outrage.

David Bell throws plenty of roadblocks into Bill's path and like a crafty old pitcher, tosses a few curve balls that leave both our hero Bill and the reader swinging at air, and wondering what just happened. The surprises keep coming until the final shock. Read fast, because you'll be holding your breath for the last few chapters. Better yet, keep an oxygen tank handy.