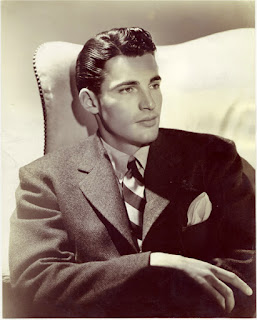 It's the birthday of William Dewolf Hopper Jr, born January 26, 1915 in New York City. Although he had been acting since the 1930s, his career peaked in the late 50s and early 60s with the role he perfected and became famous for; Paul Drake, the dependable P.I. in the TV series Perry Mason. Yet at one point in his career, he walked away from acting in disgust and became a used car salesman.

William Hopper was born into a family of actors. His father Dewolf Hopper was a well known actor and comedian, and his mother was the famous Hedda Hopper, Hollywood actress and gossip columnist. Despite this illustrious pedigree, William Hopper only got into acting because his mother expected it of him. "When I worked at Warner Bros., I was so scared I stuttered all the time," he once said.

He started his film career with Paramount in 1936 with some small roles before moving up to leading man in films such as Public Wedding, opposite Jane Wyman, and Over The Goal with June Travis.  Handsome and standing six foot four inches, he seemed a natural as a leading man. But his lack of ambition held him back.

World War II interrupted his career. Working as a frogman with explosives, the danger of the work caused his dirty blonde hair to turn prematurely white. After the war ended, he began drinking, and stopped acting for almost a decade. He became a car salesman. As he described it, "This was after the war, when you could sell anything on wheels. It was a fine business if you didn't mind being dishonest. I did."

He renewed his acting career at the urging of director William Wellman, who cast him in The High And The Mighty. Hopper made several movies over the next few years, including Rebel Without A Cause, The Bad Seed and Twenty Million Miles To Earth. 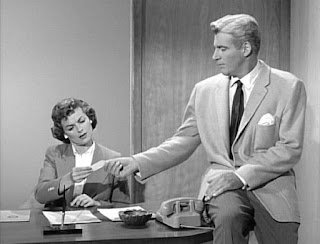 When a casting call went out for a new TV show based on the Erle Stanley Gardner mystery novels, Hopper shot a screen test for the lead role of Perry Mason. He lost out to Raymond Burr, but was cast as P.I. Paul Drake. Audiences loved his portrayal of Drake, who could play a ladies' man, a joker, a tough guy, and a reliable investigator for the defense, sometimes all in the same one hour episode. Hopper said that getting the role of Paul Drake was "the best thing that ever happened to me."

Below you can see the screen test of Hopper auditioning for the lead role as Perry Mason, alongside Ray Collins who played the cynical Lt. Tragg.