VILLAGE OF THE DAMNED RELEASED ON THIS DAY IN 1960

62 years ago today, MGM's Village of the Damned made it's movie debut in the United States. Based on the science fiction novel The Midwich Cuckoos by John Wyndham, it starred famed English actor George Sanders and Barbara Shelley. The screenplay was written by Sterling Silliphant, Wolf Rilla (who also directed), and Ronald Killoch.

It was originally planned for production in the United States but the studio caved in to objections from The Catholic League of Decency, which objected to the horror film's depiction of virgin conceptions which lead to the birth of demonic children.

As a result of these objections, the film was transferred to MGM's British studio. The script had to be rewritten, since it lacked the authentic feel of a small British country village where the action takes place. 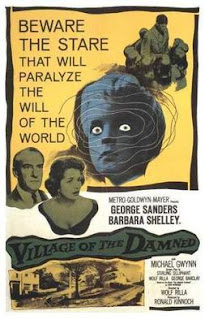 As the movie opens, the village of Midwich is cut off from the surrounding towns and everyone falls into a coma. When they awake a few hours later, all the women of child-bearing age discover they are pregnant. Suspicions of infidelity soon turn to horror when the children are born after just a few months and undergo accelerated development. Within a few years, they are on the verge of puberty, and the villagers become increasingly alarmed at their strange appearance and powers.

George Sanders plays the role of Professor Gordon Zellaby, whose wife has also given birth to one of the alien children, a boy they name David. Because of his intelligence and education, the children ask Zellaby to educate them. Because of his intellect, the professor is one of the only local villagers who doesn't fear and shun the children, a fact that surprises his normally unflappable son, who proclaims with some shock "You're not afraid of us!". The professor tries to learn from David his true origins, but his son brushes him off, declaring "I wish you wouldn't ask such questions, father. We want to learn from you."

But when villagers begin to die mysteriously, the authorities confide in Professor Zellaby that the children are a serious threat to national security, and that other cities around the world have similar "colonies" of these parasitic aliens. They enlist Zellaby in a plan to destroy them before their powers grow beyond control.
Produced on a budget of 200,000 dollars, the box office topped 2 million, and became one of MGM's biggest hits of the year. It spawned a sequel in 1964, Children of the Damned, which was not as successful.
Diabolique Magazine produced an excellent podcast discussing the film, which you can access by clicking here.
Below is the original trailer released by MGM Studios.