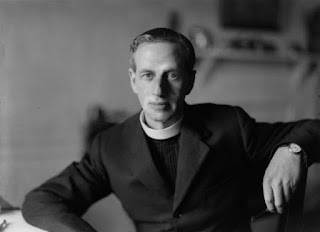 It's the birthday of Ronald Knox, born February 17, 1888 in Kibworth, England. Although he wrote detective novels, he was a priest first and foremost and wrote several religious texts. Among the most famous of these is a new translation of the Bible from Hebrew and Greek texts.  He also penned a guideline for crime fiction writers on how to practice their craft, titled The Ten Commandments For Detective Novelists.

Most of his detective novels featured a private investigator for the Indescribable Insurance Company, name Miles Bredon, whose job was to investigate suspicious insurance claims. His crime fiction is remembered best for its humor and wit, and the detailed descriptions of the local scenery. He once included a hint in his introduction to a story collection as to when the reader should try to solve the mystery. 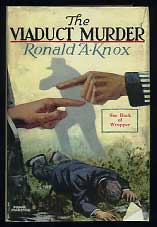 His most famous novel is The Viaduct Murder. A classic from the golden age of detective fiction, it was included in The Haycraft-Queen Definitive Library of Detective-Crime-Mystery Fiction. First published in 1925, their is a paperback version and the novel is available on Kindle.

Knox was a contemporary of some of mystery fiction's most famous practitioners, including Dorothy Sayers and Ellery Queen. He was an early member of The Detection Club, a group of English detective novelists who met to discuss the craft and set rules for how their mysteries should be written. It was in this spirit that Robert Know composed his Ten Commandments, as a guide for his fellow members. Although somewhat dated by today's standards, and certainly politically incorrect, it still has a number of gems. From The Ronald Knox Society website:

1.The criminal must be someone mentioned in the early part of the story, but must not be anyone whose thoughts the reader has been allowed to follow.
2. All supernatural or preternatural agencies are ruled out as a matter of course.
3. Not more than one secret room or passage is allowable.
4. No hitherto undiscovered poisons may be used, nor any appliance which will need a long scientific explanation at the end.
5. No Chinaman must figure in the story.
6. No accident must ever help the detective, nor must he ever have an unaccountable intuition which proves to be right.
7. The detective must not himself commit the crime.
8. The detective must not light on any clues which are not instantly produced for the inspection of the reader.
9. The stupid friend of the detective, the Watson, must not conceal any thoughts which pass through his mind; his intelligence must be slightly, but very slightly, below that of the average reader.
10. Twin brothers, and doubles generally, must not appear unless we have been duly prepared for them.

For more about Ronald Know, check out the Ronald Knox Society of North America. You can also read a good analysis of his Ten Commandments at Classic Mystery Wordpress.

I had lost my copy of the Ten Commandments by Knox. Thanks for the birthday article.