Definitely in the Running For Worst Boss of the Year

You can be sure that car dealer Larry Barnett won't be getting any presents on Boss's Day next year, after he tried to hire a hit man to knock off a former employee. The almost victim discovered the plot quite by accident.  Mr. Barnett was on another phone hiring the assassin when he butt dialed the victim, who overheard the plot and called police.

This economy has been rough on the average working man and woman the past five years, but there was a time when the worst that could happen was being fired. Apparently, a lot has changed in the world of business. It's becoming a lot more cutthroat...literally!


U.S. and British Spies Infiltrate Middle Earth. Will Gollum Have His Phone Tapped?

You have to hand it to our spy agencies. They'll go anywhere to uncover a terrorist plot against America...even if that means chasing down suspects like elves, gnomes and supermodels, according to an article in the New York Times. Spies have targeted World of Warcraft and Second Life, and have gone so far as to create avatars to collect data on players and recruit informants. The theory is that the games may be hotbeds of communication between terrorists. According to one memo,  "Virtual games “are an opportunity!” another 2008 N.S.A. document declared."

It's an opportunity alright...an opportunity to play games and oogle girls (which your taxes are paying for, by the way). Yeah, I can see how super models might pose a threat to national security. Bet they watched the Victoria's Secret Fashion Show this year, too.

TSA Seizes Gun at the Airport...From a Sock Monkey 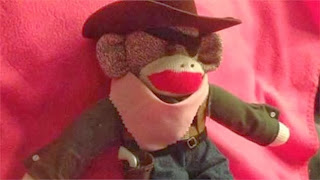 Seattle resident Phyllis May, who makes sock monkeys and sells them online, got a shock at the St. Louis airport recently when a TSA agent pulled her carry-on bag from the scanner.  The small business owner was told that she had a gun in her bag, and it was seized.

The gun actually belonged to her sock monkey. The weapon is about the size of three quarters laid end to end. It weighs less than one ounce.

When Ms. May protested, the agent allegedly said, "If I held it up to your neck, you wouldn’t know if it was real or not...". The agent also told her to contact the police about the incident.

Her sewing supplies were also seized, although she got them back, minus the weapon (naturally).

No word on the whereabouts of the sock monkey suspect, Rooster Monkburn, and we have been unable to determine if he was arrested or if bail has been set.