SCHEHERAZADE - THE LAW & ORDER SVU EPISODE YOU HAVE TO SEE

It's no exaggeration to say that this may be the best Law & Order show ever made, in the entire franchise. The fact that it stars Brian Dennehy is reason enough to watch it, and if you've never seen it, it's worth looking for. 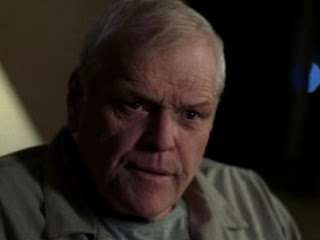 Dennehy plays the part of a dying man who is estranged from his daughter. Death, it is said, has a wonderful effect of focusing the mind, and Tierney has made up his. He wants to atone for his past mistakes. When Elliot goes to see him, Tierney promises to tell him about his past crimes, but there's a catch. Elliot has to bring Tierney's daughter to see him, so Tierney can seek forgiveness. The daughter refuses to see him and even gives Elliot and Olivia a box full of unopened greeting cards, written over a period of twenty years. She saved them, just so she could throw them back in her father's face. This woman is angry.

Liv assumes it's a crime of sexual abuse. Don't make any assumptions. This case involves robbery, muder and kidnapping, all kept hidden until one small lie emerges that destroys Tierney's family. But without the daughter by his side, Tierney won't talk. As he explains it, "The reason I never got picked up was because I kept my mouth shut! I never talked about my business to anybody, especially to a cop". But at this point, he has little choice. Bit by bit, the story comes out, prompted in part by the SVU team's discovery that the hundreds of cards Tierney's daughter refused to open are stuffed with hundred dollar bills, none of them newer than 1971. It isn't long before they find out that the money is from a string of bank robberies that were never solved. But that just the beginning. Every clue leads to more crimes, and both detectives race the clock to solve the puzzle, free an innocent man from a life sentence and re-unite Tierney with his daughter. 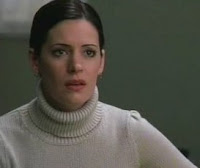 Brian Dennehy is in top form. Even as a dying man, he fills the screen. Paget Brewster gives a fiery performance as the estranged daughter who learned enough of Tierney's secrets to flee from him. The entire cast is stellar, as are the writing and directing. Tierney's loss of his daughter affects Elliot, who sees his own children growing apart, and gives him the motive to dig into the story despite his heavy caseload. Even Olivia faces her own prejudices and begins to play a surrogate daughter, in an effort to get a reluctant Tierney to open up.

In this, the opening scene, we catch a glimpse of why Elliot's cares at all about this case. He fears his family is cracking, coming apart as his daughters pull away from him after the divorce. As he gets to know Tierney, he sees many similarities between himself and the older man. Will this be him someday? A frail man, without a family?


It's hard to imagine how they packed so much story into 42 minutes, but that fact also contributes to the perfect pacing. As death gets closer, the team has to move faster to beat the clock. Get some popcorn and get comfortable on the sofa. Once this episode starts, you'll be glued to your seat.

And a television show isn't the only place a crime happens. The fact that this episode never won a boatload of Emmys is a crime in and of itself. But that's another blog post.