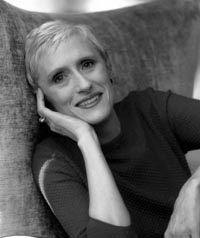 It's the birthday of Sara Paretsky, born June 8, 1947 in Ames Iowa.  She moved to Kansas as a child when her father got a job as a professor at the University of Kansas in Lawrence. Segregation was still the order of the day, and her family had to get a house in the country because realtors wouldn't sell a house in town to a Jewish family.

Her older brother Jeremy taught her to read. But as the only daughter much of the housework fell on her shoulders. She blossomed after leaving Kansas for Chicago, the setting for many of her novels. The first, Indemnity Only, came out in 1982 and introduced the world to Private Eye V.I.Warshawski. Mystery fiction would never be the same. She was one of the first writers to create a series around a strong professional female protagonist who could solve crimes without the help of a man. 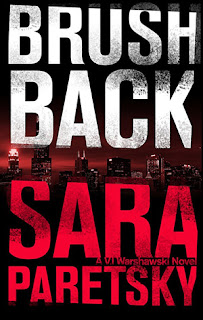 Paretsky helped change the way women were treated in the publishing world, and she set the stage for the emergence of many other female writers in the mystery genre. She, along with a group of other women writers who had attended the first Women In The Mystery conference, created Sisters In Crime in 1986.

In 2011, the Mystery Writers of America awarded her the Grand Master for her contributions to the mystery genre.

Her latest V. I. Warshawski novel, Brush Back, will be published in July and is already getting rave reviews.

To read the story about the origins of Sisters In Crime, clickety-click here.
Posted by Picks by Pat at 8:13 PM