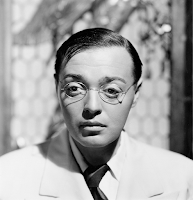 It's the birthday of actor Peter Lorre, born June 26, 1904 in Slovakia. His real name was László Löwenstein, but a stage manager changed it to Peter Lorre. He started his film career in Germany, where Fritz Lang cast him as a serial killer in the movie M. The film was an instant success and it propelled Lorre to stardom. The fame had a drawback. Lorre would be forever cast as a criminal type. Needless to say, he made the most of it.

After the Nazis came to power, he left Germany and headed to the United States. Resourceful and determined, he was cast in Alfred Hitchcock's The Man Who Knew Too Much even though he could barely speak English (he convinced the director that he was fluent in the language). He played a killer again in Stranger On The Third Floor, one of the first movies now considered as film noir.

After numerous B movies, including a stint as Charlie Chan, he was paired with Humphrey Bogart and Sydney Greenstreet in The Maltese Falcon and Casablanca. These performances, which featured his charm as well as his sinister side, would help cement his reputation as a genius actor.


"Do you think we should drive a stake through his heart, just in case?"

- Peter Lorre, speaking to Vincent Price at the funeral of Bela Lugosi
Posted by Picks by Pat at 11:57 PM