Nobody's Child Should Be On Everybody's Bookshelf

You shouldn't read Nobody's Child, the latest Georgia Davis P.I. mystery by Libby Fischer Hellman, just because it's a finalist for both the Daphne du Maurier Award AND the Shamus Award. Or because she sets her crime fiction in exotic locales that stretch from Persia, to the Caribbean, and to the cold, hard streets of Chicago. Or because she's a best-selling author. 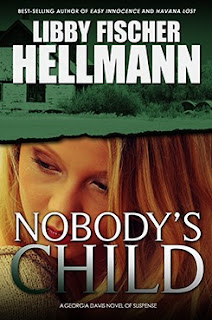 You should read it because it's a damn good story. It's no cozy, but if you like to bite into a good P.I. novel that bites you back, this one's for you.

Something very odd is going on in Chicago. Yeah, I know...that's the Chicago way. But really, something's not right. Ex-cop and P. I. Georgia Davis is working a retail snatch and run theft case when she notices she has a tail. And when you're a private investigator who's paid to tail others, a tail on YOU is bad news. The next thing she knows, a dark SUV slows down, a rifle is thrust from an open window and shots are fired. A dead body has just hit the pavement, but it's not Georgia. It's her tail. Was it a mistake, or a warning?

Things get more mysterious when a cryptic phone call and scribbled letter lead Georgia to discover she may have a sister she never knew somewhere in Chicago and deep in trouble. The clues point to a human trafficking ring that involves not just prostitution, but something much more sinister. When people want to describe someone with absolutely no morals they often say he/she would sell their own mother. Think about that for a moment...then use your imagination. Then try not to lose your lunch. It's no surprise that the Russian mob may be involved in this organized crime ring from hell. They've developed a reputation for ruthlessness that make the Italian Mafia look like the Addams Family.

Georgia is one tough P.I. But she does have feelings. Somewhere along the way she starts seeing a cop, and it may be getting serious in the romance department. As she starts to emerge from her shell she has to decide if she can trust her new beau as she hunts for her sister. Georgia may have to get help from some legally shady characters if she's going to take on the Russian mob. To do that and come out alive (and out of jail), she's going to have to keep her love interest in the dark, which is exactly what she swore off doing.

What's a hard-nosed P.I searching for her sister in a tough crime town and facing a tough heartless crime mob to do? Whatever she has to, that's what.

Libby is fast becoming the go-to gun moll of noir crime fiction in the mid-west, if not the nation. Pickup a copy of Nobody's Child and you'll soon see why.