Mystery History - Elevator To The Gallows 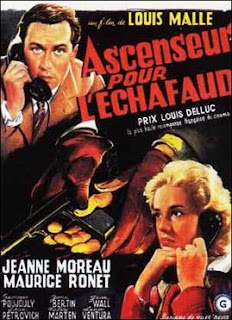 On June 10, 1961 Elevator To The Gallows was released in the United States. A French noir film, it featured a perfect soundtrack by musician Miles Davis, which one jazz critic described as "the loneliest trumpet sound you will ever hear."

The story is an old one in crime film...boy meets girl. Girl is married. Boy kills girl's husband.

As in any perfect crime, something goes wrong. Florence Carala and her lover Julien Tavernier plot to murder Florence's husband Simon Carala. Tavernier works for Mr. Carala, so he has access to his boss. He makes it look like a suicide, but realizes after the murder he has left behind a vital clue. He returns to the office, only to get stuck in the elevator as he returns to the scene of the crime.  The power's out, it's the weekend, and he's stuck there until the power comes on.

And that's not the worst of it. His car is stolen, and the thief finds a gun in the glove compartment (Taviernier is an ex-paratrooper, a war hero).  By the time Tavernier makes his way out of the elevator, the real damage is done. The thief has abandoned Tavernier's car and now empty gun and two more people are dead.

Tavernier is picked up by the police within hours of his freedom. But not for Simon's murder. The police believe that Simon Carala has committed suicide (Tavernier killed him with Simon's own gun). But the car thief has left behind a trail of circumstantial evidence that could lead Tavernier straight to the gallows...for a crime he didn't commit. 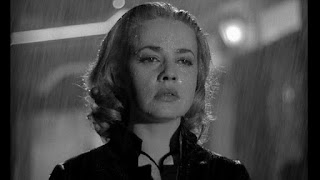 During police interrogation he finally reveals that he has been stuck in the elevator at work. To his amazement, they don't believe him. His only hope lies in Florence (played with great passion by Jeanne Moreau), who begins to put the pieces together. Can she find the real killer in time to save Tavernier? 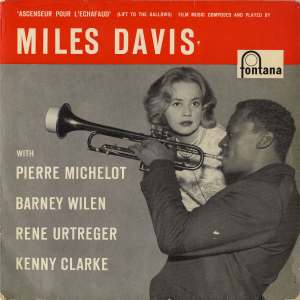 Throughout the tension of each pivotal scene is the music of Miles Davis, which easily stands alone as a first rate work of jazz. Combined with the directorial debut of Louis Malle, it becomes a work of art.  If you haven't seen this movie and heard the score, there's no time like the present. You will never forget it.