It's the birthday of Celia Fremlin, born June 20, 1914 in London. She graduated from Oxford but worked as a domestic servant and in a war factory during her youth.  She used these experiences when she began writing. Her first book, The Seven Chars of Chelsea, observed the relationship between a mistress and servant.

Her marriage and experience raising three children found its way into her first published novel, The Hours Before Dawn. A young housewife with a newborn faces not only depression but a series of eerie occurrences that leave the reader wondering about her sanity and her safety. It won the Edgar Award in 1960 for Best Mystery Novel. Alfred Hitchcock used the novel as the basis of one of his episodes in season one of the Alfred Hitchcock Hour, titled The Lonely Hours. 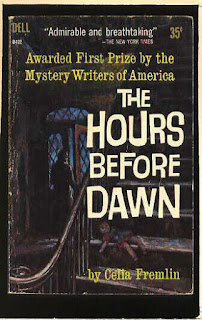 Fremlin went on to write 15 more novels and numerous short stories, many of which address the "domestic suspense" with which she is now associated.

Her reputation and interest in her work has surged in recent years thanks in large part to editor and mystery critic Sarah Weinman, who included in her anthology Troubled Daughters, Twisted Wives one of Fremlin's stories, A Case of Maximum Need.

Faber & Faber of England is also in the process of reprinting her novels, which should help introduce this writer to modern mystery fans. It's long overdue.

"The best writing is, and always has been, squeezed out somehow from the turmoil of a demanding and absorbing life -- happy or miserable, in sickness or in health, loved or hated -- it doesn't matter, so long as you are right there, in the thick of it."