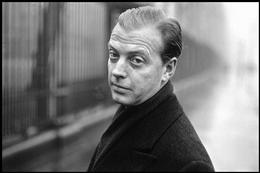 It's the birthday of Eric Ambler, born June 28, 1909 in London. Both of his parents worked as entertainers and this eventually led him to begin writing plays, despite an educational background in engineering.

As a writer he elevated the spy novel to an art form that went far beyond the early novels of John Buchan (The 39 Steps) with their chase scenes. But like Buchan, Ambler's hero was often an amateur caught in a web of espionage.

His first novel was actually a parody of the traditional spy thriller. Despite this (or perhaps because of it) The Dark Frontier received good reviews. Prophetically, it had a plot involving the theft of atomic secrets.  He wrote four more spy novels in the next three years, including the one that most consider his masterpiece, A Coffin For Dimitrios. 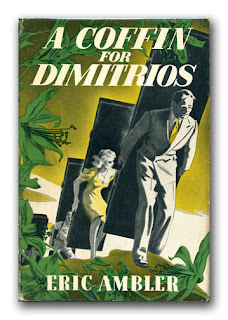 Many of his novels feature individuals fleeing between countries that appear and disappear during times of war, or refugees who find themselves without a country at all...scenes that are still familiar today in Iraq, Syria and Ukraine.

Ambler enlisted in the army when World War II started. The recruiter, when he learned that Ambler was a novelist, asked "But is there anything you can actually do?"

There was. He signed up with the army film unit and wrote scripts for propaganda films, encountering along the way David Niven, John Houston and Humphrey Bogart.

After the war he worked in Hollywood for a while, and continued to write spy thrillers. But the idea of a naive or hapless individual falling into the middle of a spy plot or den of secret agents was getting harder to sell as the Cold War deepened. Spy work was becoming more complex and professional espionage was usually being handled by...professionals.

Ambler's greatest legacy is the enormous influence he had on other writers. Graham Greene and John le Carre both praised and tried to exceed his intelligent writing with their own thrillers. Le Carre referred to Ambler's novels as "the well into which everybody had dipped."

He also brought the spy thriller out of the gutter and into the home of millions of grateful readers.

''Dorothy Sayers had taken the detective story and made it literate. Why shouldn't I do the same with spies?''
- Eric Ambler