The first of an occasional series that examines the villains, crooks, and scoundrels who have made a strong impact in the history of crime fiction, both on the printed page and the big screen. We follow their exploits and cheer when they are defeated. And at times, we can't help but admire them.

Every decent story has conflict. That's especially true for crime stories. Without conflict, there would be no story and every tale would end on page one with the words, "And they/he/she/it lived happily ever after".

But good stories aren't like that. We demand more from them, and conflict is essential, whether it's Man vs Nature, Man vs Self, Man vs Society...or Man vs Man. It is this last that concerns most crime fiction, the battle between the good protagonist and the evil adversary. And there may be no more famous adversary in modern crime fiction than the nemesis of detective Sherlock Holmes...Professor Moriarty.

Who is this criminal mastermind, a man described by Sherlock Holmes as the "Napoleon of crime"? Despite appearing in over 60 films, television shows, radio adaptations, plays, and even video games, Moriarty was created merely as a convenient prop used by Sir Arthur Conan Doyle to kill off his detective, Sherlock Holmes. The author could not have imagined at the time that this mathematician turned underworld criminal would acquire a life of his own.

Moriarty appears in just two stories by Doyle, the first being The Final Problem, where he is used to dispatch Sherlock Holmes. The other appearance is made in The Valley Of Fear. Holmes describes his adversary with these words:

He is the Napoleon of crime, Watson. He is the organizer of half that is evil and of nearly all that is undetected in this great city. He is a genius, a philosopher, an abstract thinker. He has a brain of the first order. He sits motionless, like a spider in the center of its web, but that web has a thousand radiations, and he knows well every quiver of each of them."

Holmes goes on to describe his efforts to put Moriarty out of business, with more than a touch of admiration for an adversary whose intellect is equal to his own. And Moriarty returns the favor, but this mutual admiration only goes so far. Moriarty warns Holmes to cease his efforts to destroy his criminal empire: "I am quite sure that a man of your intelligence will see that there can be but one outcome to this affair. It is necessary that you should withdraw. You have worked things in such a fashion that we have only one resource left. It has been an intellectual treat to me to see the way in which you have grappled with this matter, but I say, unaffectedly, that it would be a grief to me to be forced to take an extreme measure." 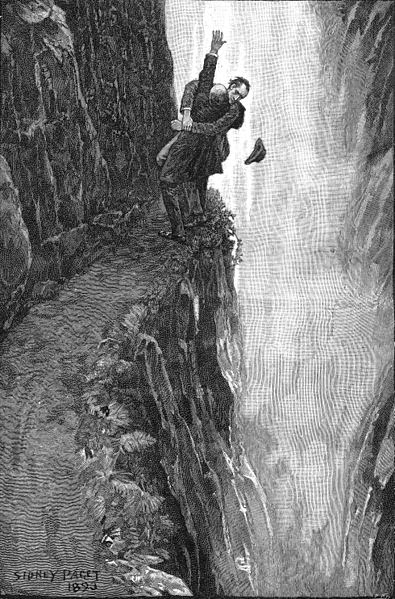 Holmes, of course, refuses to back down. The pair converge at Reichenbach Falls in Switzerland, where Moriarty allows Holmes to pen a farewell note to Dr. Watson (what a gentleman!) before attacking the detective. Both men plunge over the falls to their deaths. The End. But not for long.

Sir Arthur Conan Doyle thought the Sherlock Holmes stories were keeping him from other projects, but revived Holmes due to popular demand (and for the money, let's be honest). But he did not revive Moriarty.

Little did Doyle suspect that his sinister creation would acquire a reincarnated life of his own. The website IMDb lists over 50 screen appearances by Moriarty, the earliest in 1908 and the most recent in 2014.

Sherlock Holmes lives on. And as long as he does, as long as writers continue to write stories that feature the slender detective with his hawk-like nose and razor sharp mind, Moriarty will live on as well. For what criminal, what adversary can possibly challenge Holmes as an equal? After more than a century, we've come to realize that Holmes wouldn't be Holmes without his arch enemy.