Part of an occasional series that examines the villains, crooks, and scoundrels who have made a strong impact in the history of crime fiction, both on the printed page and the silver screen. We follow their exploits and cheer when they are defeated. And at times, we can't help but admire them. 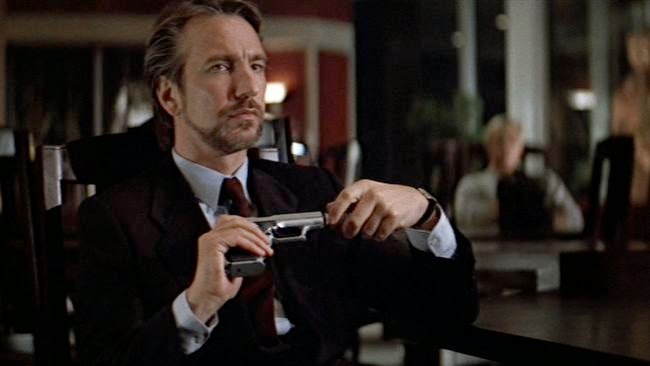 It's hard to believe that more than a quarter century has passed since Die Hard ﻿made its film debut and introduced one of crime's greatest villains - Hans Gruber. Played by Alan Rickman in his first major screen role, his performance made a dramatic impact and set the standard by which evil doers are often judged today. So well known is his character that most filmgoers mistakenly assume Rickman has played multiple roles as a villain, when in fact he has actually performed in only a few during his long career (another notable being the Sheriff of Nottingham in Robin Hood, a brilliant performance). Hans Gruber even made the American Film Institute's list of the 50 Greatest Movie Villains.

In this film we meet Hans as he emerges from the back of a rental truck in the parking garage of the Nakatomi Plaza. With him is a hand-picked collection of crooks & thugs, including a telephone technician and a computer genius. It's clear that this high tower break-in has been well-planned and, in the beginning, flawlessly executed. Hans has studied his target down to the finest detail. As he enters the Christmas party on the 30th floor, and searches for his target, CEO Joseph Tagaki, he rattles off the man's resume and list of achievements from memory (a list which include his role as "father of five").  He turns to Takagi, smiles and holds out his hand, as if he were arriving for a job interview! "How do you do? It's a pleasure to meet you."

As John McClane puts it later "They're well financed and very slick."

Not to mention suave, courteous and even charming...well, at least Gruber is. Yet most of the police and the FBI assume that Hans is leading a bunch of terrorists, an assumption our villain encourages because it fits in with his master plan. All he really wants is to get inside the vault, but to disguise his motive, he makes the usual demands to the police about freeing his "revolutionary brothers and sisters from around the globe".  It's all just an act. One of the groups he read about in a magazine.

As Hans predicted, the FBI cuts power to the building, and this cuts power to the electronic system securing the safe. And just like that, Hans and his henchmen are pulling out a fortune in bearer bonds. The feds are planning to gun down the "terrorists" when they head for the roof with the party goers as hostages, but Gruber has a nasty surprise waiting for them.

In this scene from the movie, Hans demonstrates his charm, intelligence, and sense of humor as he negotiates with Joseph Tagaki over the computer code to access the vault. Until he lays the gun on the table, you could imagine this as a friendly business deal, but Hans, though charming, reveals his ruthlessness when the negotiations break down. His complex portrayal made Die Hard one of the most entertaining movies of 1988, and the film grossed 140 million dollars, blockbuster numbers at the time.

﻿﻿
If like me, you can't get enough Gruber, check out these additional links, including this BBC America article on how Alan Rickman inspired the film scene where Gruber and McClane first meet. Also, Cult Spark's Movie Villain Hall of Fame post. And for a peek at Hans Gruber's rap sheet, clickety-click here.

Holly Gennero McClane: After all your posturing, all your little speeches, you're nothing but a common thief.

Hans Gruber: I am an exceptional thief, Mrs. McClane. And since I'm moving up to kidnapping, you should be more polite.
Posted by Picks by Pat at 5:44 PM