Mickey Rooney, age 93, has passed away. He made dozens of movies and started his film acting career at the tender age of six. His real name was Joseph Yule, Jr. and he was born in Brooklyn, New York. 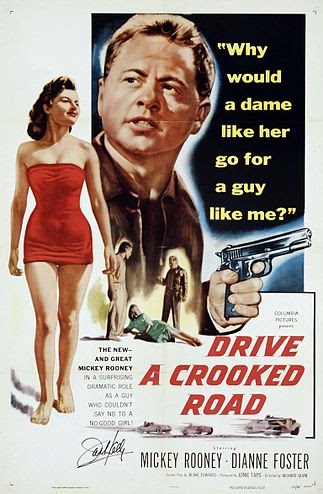 He almost always played the good guy in his films, most of them comedies, romance, and coming of age pictures. But one movie he made as the bad guy stands out as a little known gem. It didn't get a lot of attention from the public, but won rave reviews from the critics...Drive a Crooked Road, a noir crime film made in 1953.

He made the movie during a period when he had fallen out of favor in Hollywood. It was an atypical role, but he played it with his usual gusto.

Rooney plays a race car driver named Eddie Shannon whose best days are behind him, and he now works as a garage mechanic. He falls for a beautiful girl, Barbara Walker (played by Diane Foster), who convinces him to drive the getaway car in a big bank robbery that will make them all rich. He reluctantly agrees, figuring he can get the money and the girl.

But the femme fatale's criminal boyfriend, Steve Norris, has other ideas. After they meet to divide the loot, they plan to split town leaving Eddie behind. When Eddie comes looking for Barbara, she tearfully spills the beans, forcing the gang to make the decision they've been hoping to avoid. One of the gang takes Eddie for a ride from which he won't be returning. But Eddie has no intention of falling for any more scams.

Incidentally, the role of Steve Norris was played by Kevin McCarthy, who would later star in the cult classic, Invasion of the Body Snatchers.

Drive A Crooked Road has some great twists and lots of suspense. You find yourself rooting for Eddie from the very beginning, which plays into Mickey Rooney's strength as an actor. It's unusual to see him in a role like this, and even if you're a fan of Rooney, you may have missed it. The music really evokes the theme of tragedy and loneliness that draws Eddie into the clutches of the woman and her gang. It's well worth looking for. You can check out the movie trailer on Youtube.

Im glad to know he was still enjoying life at his age, sorrounded by great friends, I found more about Miss O'Brien here, another great actress http://dailyentertainmentnews.com/movies/margaret-obrien-mickey-rooneys-new-girlfriend/

I loved the music score for this film. Does anyone know if any of it was ever published as sheet music?