Choosing a title for your novel is one of the most exciting tasks you'll face as a writer...and one of the most difficult. The right title can catch readers' attention and be a boost to sales. And the wrong title? Well, how many books would Fitzgerald have sold if he had chosen The High-Bouncing Lover as a title instead of his final choice, The Great Gatsby? John Steinbeck's Of Mice and Men was originally called Something That Happened. With that title, I don't think much would have happened. 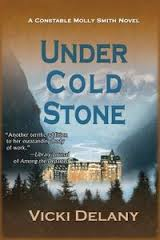 If this doesn't convince you (and even if it does), check out the great blog post by Vicki Delany on Type M For Murder, where she discusses the importance of a good title. She must be doing something right with her choices. She's just published the 7th book in her Molly Smith series, Under Cold Stone. Great title! Of course, it probably helps that she's a damn fine writer.

For more classic titles that might have been called something else, clickety-click here.

Don't Talk About Your Characters. They Might Get Angry

Alice Mattison posted an article on the New York Times blog, Opinionator, in which she talks about writing her first novel. One of the things she discovered, which all writers I think eventually discover, is that her characters aren't just words on paper. As she puts it, "If I talk about the book, I believe — I cannot help believing — my characters will be angry, and will no longer confide in me about their embarrassing, troubled lives."

If you're thinking that maybe Ms. Mattison is typing with less than a full keyboard and that this is a little creepy, well, you may not be a writer. But read the article. She really understands the process. I know. One of my own characters told me so.


Famous Authors Who Were Rejected

Do you still think only newbies (and you) are still collecting rejection slips? Far from it. All writers, including the great ones, got their share. Take a gander at some of these priceless mistakes made by various editors.

"There certainly isn't enough genuine talent for us to take notice."  - On Sylvia Plath.

"We are not interested in science fiction which deals with negative utopias. They do not sell."  - Given to Stephen King for his first novel, Carrie.

"The girl doesn't, it seems to me, have a special perception or feeling which would lift that book above the 'curiosity' level." - For The Diary of Ann Frank.

See the whole list on this page. And keep writing.

By the way, thanks to Chad Hanson for creating this great list!

A couple of weeks ago, I alerted readers that a rare first edition of Casino Royale, the first Bond novel, was being auctioned. At the time, the bidding was up to $10,000 dollars. Raymond Benson, who wrote six novels in the Bond series, and who penned the Edgar nominated definitive guide to the famous spy, The James Bond Bedside Companion, said he thought that was a bargain.