Man Arrested On Way To Hospital, Misses Birth of Child

A man driving to the hospital with his girlfriend in labor stopped to ask a police car for an escort. Unfortunately, he got more than he bargained for...he was arrested. At the time, he had a suspended drivers license and an outstanding warrant.

I appreciate respect for the law, but I'm sorry Maceo Saunders had to miss the birth of his first child. Mother and child are doing fine, and Mr. Saunders got to hold his son after posting bail. Read more about it here.

Libby Hellman, critically acclaimed author of 11 crime novels and numerous short stories, makes an appearance this Thursday on Investigation Discovery channel. Murder Mansion examines Bruce and Darlene Rouse, who were living the American Dream...until a nightmare ended it. I'm sure she'll have some insightful commentary. Don't miss it! Starts at 9 PM EST on April 10th, 2014.

A woman who helped her underage daughter host a wild drinking party at her home claimed she had no idea what was going on when police called her cell phone. She even told them she was out of town...and then sheepishly apologized after the cops found her hiding in a bedroom at the house.

Both mother and daughter (who had to be supported by friends because she was so drunk) have been arrested. The apple apparently doesn't fall very far from this tree, but I think a little pruning may be in order. On second thought, maybe a lot. 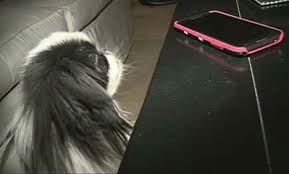 A Nebraska woman got a shock while watching TV with her dog when the Sarpy County dispatch center spoke on the phone and asked her if she had an emergency. Seems the dog was pawing at the woman's cell phone and dialed 911. The embarrassed woman apologized, and no charges were filed. KETV has a news report and the dog, Sophie, demonstrates her dialing talent. You can see the video here.

And don't worry. No animals were injured in the making of this video.

A man who was pulled over by the cops had perhaps the best explanation ever when the officer found marijuana in the vehicle.

"That's not mine," the driver said. "I just stole this car."

Yup. He stole it.

Police confirmed the car was stolen and Douglas Glidden was arrested for car theft...and possession. No word on whether he has a lawyer, but maybe he'll get a judge with a sense of humor. Read more at the Maine Public Broadcasting Network.