Add to the growing list of NFL players arrested in the past four months, Colts safety Joe Lefeged, who will be arraigned on multiple gun charges this week. Since the Super Bowl was held in February, 29 players have been arrested on charges ranging from possession of illegal weapons to murder. In one of the most high profile cases, ABC News has reported that the Aaron Hernandez murder investigation is exploring the possibility that the victim was silenced to prevent him from revealing information that might tie Hernandez to two more murders in Boston that occurred in 2012.

NFL officials may be privately looking past the upcoming 4th of July holiday to the end of the month, when many teams will start training camp, thus taking players off the streets and back to work.

Meanwhile, the US Conference of Mayors and the NFL have issued a joint statement in their preamble, saying in part: "Professional sports teams are businesses which promote civic pride, generate jobs, revenues and other local economic development. No word on how many of those jobs are tied to law enforcement or prisons, but maybe I missed something. You can read the entire joint statement HERE.


It's Safer To Say ILUVNY 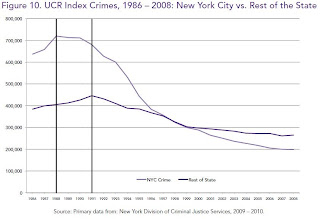 New York City, once an example of the growing crime problem in the U.S, has seen it's murder rate decline 24 % in the past year, and this year may record less than 1 homicide per day at current rates, according to an article in the Wall Street Journal (paid subscription req'd). As of June 27th, there have been 154 homicides in the city.

The Journal article mentions that other large cities have also seen dramatic drops, including Chicago, Philadelphia and  Los Angeles. Several factors may have contributed to the drop, such as "advances in medical technology, demographic shifts driven by immigration and a culture that is less accepting of violence."


Chicago Man With Air Tight Alibi Convicted of Double Murder. Where Was He? Being Interrogated By The Cops. Is that what they mean by "The Chicago Way"?.

According to the Chicago Tribune, a 17 year old who was in jail being questioned by the police while two people were killed in a shooting, was convicted of the crime and has spent the last 20 years in jail. Making this revelation all the more disturbing is that it wasn't an accident. In fact, Cook County prosecutors knew that Daniel Taylor was innocent of the crimes, and proceeded with the case anyway, hiding evidence that would have freed the young man.

At the time of the murders, Taylor was in lockup for disorderly conduct. Police logs, as well as eyewitness testimony from prison officials, gathered by ADA David Styler, was handed over to county prosecutors, who hid them from Daniel Taylor's attorney.

Thomas Needham and Jeanne Bischoff tried the case against Taylor. Needless to say, they're not commenting.


Be A Super Hero! Fight Crime By Reaching For Your Smart Phone. 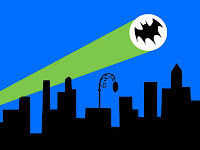 That thin piece of tecnology in your back pocket may turn out to be the best crime fighting tool invented so far in this century, according to an article by Business Insider.  New smart phone apps allow you to access police department social media sites, view important alerts, like the wanted list, and crime maps; leave tips; and look at photos and videos.

There's even an app, called iWitness, that will turn on audio and video recording and mark your location by GPS on a server accessible to the police, with a single screen touch. A second touch calls 911 and alerts up to 6 contacts via text, and sets off a loud alarm. Holy Smoke Signal, Batman!
Posted by Picks by Pat at 4:05 AM