Heat Too Much For You? Cool Down With "A Cold White Sun" by Vicki Delany

The latest Vicki Delany novel comes out on August 6th, just in time for the hottest part of summer. Fans of the Molly Smith series as well as newcomers will want to read this installment with gusto. 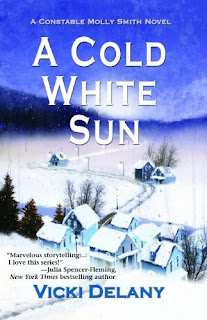 Winter is almost over in Trafalgar, but snow and ice still cover the ground, along with the corpse of
Cathy Lindsay, gunned down while taking her pooch for a stroll near her home. What seems like a random act of violence or perhaps an accident soon takes on darker tones. Witnesses at the school where Cathy taught reveal that the victim was a little too close to a math teacher, a man trained in special forces who may have rejected Cathy's advances, with fatal consequences.

Was Cathy having an affair? Was her marriage as solid as the husband claims? More suspects emerge when detective John Winters travels to Victoria, where Cathy's husband has been spending his business trip evenings not at a hotel, but in the arms of another woman.

Vicki Delany makes this series worth reading with her rich attention to the lives of her characters. Readers come to care about the personal fate of the main protagonists, Constable Molly Smith and Sargent John Winters. Molly continues to struggle with her feelings for her boyfriend, and wonders whether a move to a larger city will boost her career prospects. Winters, in turn, sees in Molly a smart young police officer who might someday make a fine detective, if she can put her rookie mistakes behind her.

A few clues are subtly buried in the novel and emerge later to strike the reader with that "Why didn't I see that coming?" feeling, and a surprise ending will please and delight you.

Don't worry about what to read on the beach in August. A Cold White Sun, a blanket and some sunscreen is all you'll need.
Posted by Picks by Pat at 9:43 AM