I missed the Loft Conference in April, which is a shame, because they invited award winning novelist Marcus Sakey to talk about the mystery novel. Marcus is not just a great mystery writer but is very generous by sharing what he's learned with other mystery writers.

Thanks to this video, you can gain some great insight on what it takes to be a successful writer. I've already watched it. It's a little under an hour, and better than anything else that's on TV tonight, that's for sure.

Local Appearances
Paul Ferrante will discuss his mystery novel, Last Ghost At Gettysburg, at the Fairfield Library on July 23rd in Fairfield, Connecticut. Just in time for the 150th anniversary of the battle that saved the Union.
Jenny Milchman will be at Foodies in Omaha, Nebraska to discuss her suspense novel, Cover of Snow, on July 21st, then off to Steamboat Springs, Colorado (July 24th) and Boise, Idaho (July 27th). More details can be found on her tour guide.
Craig Johnson, author of A Serpents Tooth, maintains an equally busy schedule, putting in appearances in Washingston and Oregon this month, appearing at Seattle Mystery and Elliott Bay in Seattle on July 13th and The Book Bin on July 13th.

Rosemary Harris, author of several deadly fun horticultural mysteries, including Pushing Up Daises, will appear at the Kent Memorial Library in Suffield, Connecticut on July 17th at 7 PM. Bring a shovel. There may be bodies buried in the garden.
﻿
Upcoming Mystery Conferences
Some great conferences coming up in the next couple of months. In California, Book Passage has it's mystery conference starting July 25th. The faculty features a who's who of mystery, including Alex Kava, Cara Black and Susan C. Shea.
And in New Brunswick, New Jersey,  Deadly Ink starts August 2nd, with guest of honor Hank Phillippi Ryan and toastmaster Rosemary Harris. 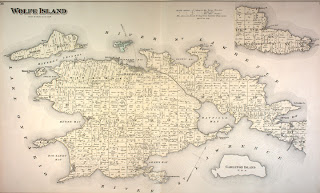 North of the border, mystery fans and writers are gathering on an isolated island which is the birthplace of Canada's first crime writer, Grant Allen. The one day conference, The Scene of the Crime, starts August 17th on Wolfe Island. Frankly, it's worth going there just to brag to your friends. And bring your dramamine. The ferry is the only way on or off the island, so be early. Life jackets provided. Just in case, you know.
And you thought your weekend would be boring?
Don't Throw Out Those Old Comics! You May Have a Budding Author on Your Hands
Proving what every male has known since childhood, comic books are a vital and important part of our American heritage, and may provide inspiration for the next great mystery writer. Just ask Walter Mosley, who confesses that comics had a profound influence on his story telling abilities. According to the interview at Comic Book Resources, "They taught me about writing dialect and how a monster can also be a hero." One of his favorite comic super heroes, Spiderman, was one of mine also. Nice to know we have at least that much in common.
Read more about Mosley's favorite reading material at this earlier interview via the New York Times
Posted by Picks by Pat at 12:46 AM