Jenny Milchman's debut novel, Cover of Snow, gives you a reason to stay up late tonight.

When Nora's husband is found dead in their home after an apparent suicide, she struggles to find answers in the midst of overwhelming grief. They don't come easily. Brendan was a policeman, and his fellow officers brush her off when she asks them questions. Naturally she assumes that they are merely trying to protect her, albeit in a patronizing way that cops can sometimes adopt when dealing with wives. 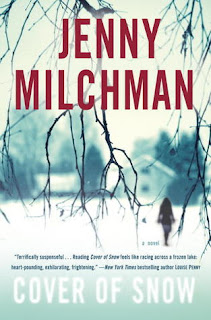 The truth behind his death is much worse, but it takes her a long time to discover it.

Her mother-in-law, Eileen Hamilton, isn't any more useful in finding answers. She isn't trying to comfort Nora so much as to blame her. To say that Eileen is cold-hearted is an understatement. I'm convinced she mentored under the guiding hand of the wicked witch of the west. But Eileen had a deep seated anger towards Brendan, which goes back decades. Nora finds clues in Eileen's basement, but not enough to explain what happened when  Brendan's young brother perished beneath an ice covered pond. If Nora learns the answers, it wil shatter the entire town. So the police will do whatever they have to do to stop her.

The truth is so corrosive, it must stay buried, even if more innocent people have to die...and they do. Nora's only allies are a local reporter who is attracted to her, and a garage mechanic with limited social skills who speaks in ryhme. Both men will help her discover the truth, but not without paying a price.

This book has a great plot and setting details that put you deep into the story. When you step outside onto the icy streets, you feel the wind biting your bones and see the condensation of your breath as it hits the air. The weather isn't just a backdrop for the story. It's alive, a vital character that shapes the action, at times helping Nora in her search for answers, at other times a demon that blocks her at every turn.

The author can shape a sentence that makes a lasting impact. Her description of Nora's reaction to a sudden sound is both accurate and poetic, as she says, "I heard the dragon's breath of some distant furnace."

Who can read a sentence like that, and not be amazed?

The writing is so good, it's hard to believe this is Milchman's debut novel, but in some respects, she's a seasoned veteran. She wrote seven unpublished novels before getting this one into print, and even that was a hard road. The story was almost picked up three times before she signed a contract, and it took years to get published.

I have a feeling we'll get to see her next work a lot sooner than that. I'm already waiting for it.

It's hot this summer. Read this book. You'll be pulling a blanket over your shoulders to ward off the chill, even as the thermometer hit triple digits.
Posted by Picks by Pat at 7:11 AM

Email ThisBlogThis!Share to TwitterShare to FacebookShare to Pinterest
Labels: A Cover of Snow, Jenny Milchman

As I just Tweeted, the rare review brings tears to my eyes. Happy ones. Thank you for this, Pat.

I agree. This was a great book and it kept me turning pages breathlessly.

Thank you for a book that was a joy to read. Ironically, I was reluctant to pick this book up at first. So glad I did! I'm pleased you have made such a wonderful debut as an author.