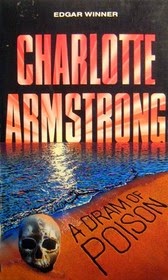 A Dram of Poison won the Edgar Award for Best Novel in 1957, and after reading this novel, it's easy to see why. It's a complex tale of love, disappointment, jealousy, and carelessness that leads to catastrophe. Not your traditional whodunnit, but a story packed with so much suspense you had better read it on your day off, or consider calling in sick. Once you've reached a certain point, there is no stopping until the final page has been turned.

Trouble isn't long in coming when Ken Gibson, a middle-aged English professor suddenly decides to marry Rosemary, a 32 year old woman  who has been left homeless by the death of her invalid father. At first things go swimmingly, as they used to say. But the real trouble starts when Ken is injured in an auto accident (while his wife is driving...a mishap that will cause her much hand-wringing in the weeks to come) and Ken's strong willed sister Ethel comes to live with them and help care for Ken.

It doesn't take a psychologist to realize that most family dynamics only allow one woman to dominate a household (safely), and Charlotte Armstrong is a genius for milking the tensions that erupt when the dominant one is not the wife. Ken, caught between two women he loves, decides to end his life to escape what has become intolerable, especially after he observes Rosemary developing a close friendship with a man much closer to her own age. Convinced that his wife would be happier with their neighbor, Ken procures some odorless, tasteless, fast acting poison which he hides in a bottle labeled olive oil.

Then, disaster strikes. A bottle of poison can be a dangerous weapon in the wrong hands.

In resolving his dilemma, Ken gets a strong assist by, of all people, a bus driver. This man's intimate knowledge of the city streets becomes crucial in the story as the suspense builds to an intolerable level. And he proves to be more than a stick figure character. He debates philosophy and the human condition with Rosemary, and more than holds his own.

It's typical of Armstrong to sculpt every character with such depth that they could easily substitute for the main character. Any baseball manager would envy such a deep bullpen.

A Dram of Poison is a real treat. Put the cell phone on silent...this story screams for your attention.