Sink Your Teeth Into "Dry Bones" by Craig Johnson

Somewhere among the rock strewn gulleys and cliffs of Absoroka County the skeleton of a female is discovered. When all the flesh is gone it can be difficult to determine the cause of death, but not in this case. Evidence of a violence so brutal that it left scars in the bones make it clear that this was a crime of murder with more than one suspect. But the killers won't have to answer for their actions.
The statute of limitations just doesn't apply when your victim perished 65 million years ago. 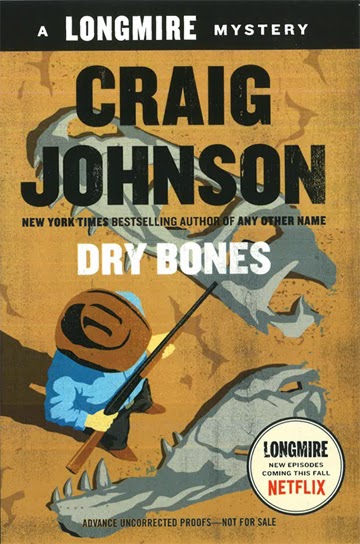 The skeleton belongs to a T-Rex, you see. It's worth a fortune. And that kind of dough attracts a lot of attention. Soon the FBI and the U.S. attorney's office take an interest. There's some dispute over who owns the land on which Jen (the dinosaur's new name) was found. The ranch belongs to Danny Lone Elk, who may or may not have sold it to the Cheyenne Indian Nation. He or they'll get the skeleton, unless the dig site on Danny's ranch crosses onto federal land. In that case, the FBI, aided by a publicity seeking acting U.S. Deputy Attorney General will seize it. Add to this combustible mix the media circus driven by the discovery of the largest T-Rex in history.

And you thought Walt Longmire was going to have a relaxing few days off with his daughter, who's bringing Walt's newborn granddaughter to visit? Think again.

Things go from bad to worse when Danny Lone Elk winds up dead, floating face down in a reservoir on his own land. It falls on Walt's shoulders to solve the mystery of Danny's death and decide if he drowned in an alcoholic stupor, or was killed so someone could make the moves on Jen. Along the way both persons unknown and the unforgiving Wyoming landscape threaten to make Sheriff Longmire extinct.

The writing moves at a quick pace, and entertains even as it educates (did you know that Wyoming once hosted ocean front property?). Walt is joined by many of the same characters that we've come to enjoy, including Lucian, a former Sheriff who both hinders and helps the investigation. Undersheriff Vic appears with her usual take no prisoners approach to crime solving, and like Walt, has little time for a show-boating US attorney who is so media conscious he wears makeup to a press conference and only drags in Walt to appear as a prop. "You didn't mess up his lipstick, did you?" Vic teases Walt after the chaotic appearance on the courthouse steps.

In addition to his professional woes, Walt faces a personal crisis that threatens to take away the one thing he cares most about - his family. Fortunately Henry Standing Bear has his back and while assisting Walt, provides not only physical protection but the kind of personal advice that only a best friend can provide. We should all have some one like him in our corner.

The latest edition of the Walt Longmire mystery series, Dry Bones was 65 million years in the making. But you won't have to wait that long to enjoy this tense, action-filled crime story. The book comes out on May 12th.

By the way, did you know that the acronym F.B.I. has two meanings? One is Federal Bureau of Investigation. And the other one...isn't.
Posted by Picks by Pat at 10:17 AM

Can't wait. Think I saw a NOVA special about this topic, too.