It was on May 23, 1950 that American moviegoers got their first glimpse of The Asphalt Jungle. Based on the novel by W. R. Burnett, it tells the story of a criminal mastermind who assembles a team of second-class hoods to pull off a fabulous jewel heist. It featured a cast of top notch talent, including Marilyn Monroe in her first film role, though it was a minor one, as the mistress of slimy attorney Alonzo Emmerich. Sterling Hayden played Dix Handley, a muscle man. James Whitmore, his friend and co-conspirator, played Gus.

Sam Jaffe portrayed the recently released Erwin Riedenschneider (referred affectionately to in the movie as "Doc" by his associates). He's the mastermind with the plans for the jeweler they intend to rob of a million dollars in precious gems. He brags that he could "sell the plans on the open market for a hundred thousand dollars" but he prefers to execute it himself, so he can get a bigger take (spoken like a true capitalist).

All of the men have hit rough patches in their lives and hope this final heist will be their way out of the criminal life. Dix is even hoping to use his share of the loot to buy back his family farm so he can retire and raise horses among the blue grass of Kentucky. This is the dark side of the American Dream.

The planning before the heist is brilliant and every attention is given to detail. Doc and his bookie financier, Cobby, even conduct interviews for the men they will need, as if they were part of a corporation. They need a safe-cracker, a getaway driver, and a strong arm man (a hooligan). This is the kind of planning most criminals can't be bothered with anymore. Criminals today just aren't the men their fathers were...hard working, organized men who take a professional pride in their work. 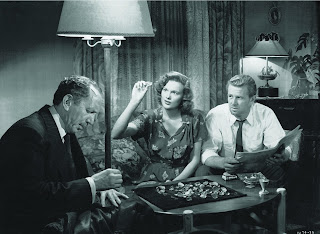 Yet despite being led by the best in the business, things start to go wrong. Even though they pull off the caper, one of the gang is shot while escaping. A crooked policeman is hot on their trail and may turn legit by arresting one of the gang just to save his job. And worst of all the lawyer who has arranged to fence the jewels is planning to double cross them and keep the haul for himself. One by one, the gang fall victim to greed, betrayal or bad luck. Even Doc is betrayed by his own weaknesses when he is spotted in a restaurant by two policeman when he lingers too long while watching a pretty girl dance to a jukebox.

The brilliant John Huston directed the film and it was nominated for four academy awards, including Best Director, though it lost. The film's realistic look at the criminal underworld and dark vision have come to define film noir and set a high standard for the pictures that followed. Few movies have surpassed it in the genre.
Posted by Picks by Pat at 1:00 AM