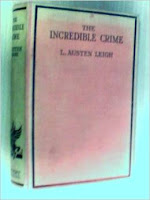 Lois Austen-Leigh's The Incredible Crime is set to be reprinted for the first time since 1931. The granddaughter of Jane Austen's nephew is unknown today, but she published four crime novels during her lifetime. And when this debut work came out it garnered praise from none other than the Times Literary Supplement. The reviewer didn't think much of the mystery genre, though, stating, "Miss Austen-Leigh might consider a more serious vein of writing."  Another reviewer said her writing contained "passages of unusual beauty" and that she was "something more than a writer of mystery stories", as though beauty and mystery were incompatible.

Still, the current editor, Kirsten Saxton, professor of English, is thrilled to be bringing the novel back to the printed page. It contains not only a good mystery but a lot of entertaining characters, including " a cigarette-smoking brash young woman who can curse like a sailor".

Rumor has it that the novel was written at the same desk used by the author's more famous ancestor. Fans of Agatha Christie or Dorothy Sayers, historical novels, and pre-WWII British mysteries should all look forward to the novel's re-release in 2017 by the British Library.