Ladies and Gentlemen of the jury have you reached a verdict?

We have, Your Honor.

In the case of Carl Brookins vs the Reading Public, charged with writing a highly entertaining PI novel with malice aforethought on providing historical accuracy without boring the reader, how do you find? Is the defendant Guilty or Not Guilty? 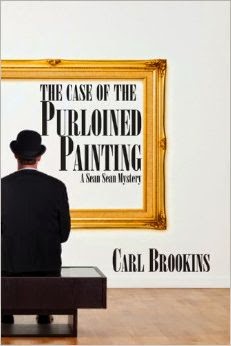 There you have it. The Case of the Purloined Painting is not only entertaining, but (gasp) educational as well. As an added footnote, the novel, which is one of a series featuring the private detective Sean Sean, stands on its own feet without requiring prior knowledge of the character by the reader. However, this charge was dropped in the interest of expediency.

This is my first encounter with Sean Sean (the PI so nice they named him twice). He doesn't fit the typical stereotype of a Private Eye, and that alone is refreshing. He hails not from sunny Florida or the gritty streets of New York, but Minneapolis, Minnesota. It seems that citizens of the upper Midwest from good Norweigan stock have the same foibles as the rest of us...they commit crimes. That's where Sean steps in - all 5 1/2 feet of him (another break with tradition).

A mysterious woman comes to him and claims to have seen a man tossed from a bridge after being accosted by two men. For reasons she won't explain, she is reluctant go to the police and hires Sean to investigate. When a dead body with the name of Manfred Gottlieb does turn up, Sean starts following the trail of clues. They lead to a painting which may have been looted by an American G.I after World War II, a painting that was used to build a huge fortune for a powerful Minnesota family. And as Sean begins to peel back the layers, lots of folks take a sudden interest in art history. The head of a local law firm, the police, and even the Justice Department pay Sean a visit. But they're mere annoyances compared to the shadowy figure that's trying to kill him.

The painting may not even be the grand prize. Sean begins to uncover pages from a ledger written in German that catalogue more pieces of artwork, much of which now rests in museums around the world. Is this a wish list for an art collector, or a crime list of Nazi plunder?

Either way, it may be the list that led to Gottlieb's murder, and the killer has no qualms about adding to the body count. It's up to Sean to keep that to a minimum while trying to solve the crime. How he manages that task provides the reader with a page turning story and along the way proves that art, and art crime, can haunt us long after the artist's paintbrush is put away.
Posted by Picks by Pat at 7:15 AM

Email ThisBlogThis!Share to TwitterShare to FacebookShare to Pinterest
Labels: Carl Brookins, The Case Of The Purloined Painting