It's the birthday of mystery writer Patricia Carlon, born January 9, 1927 on a small farm in rural Australia. During the 1960s, she wrote some of the most suspenseful novels ever produced in her native land. Publishers Weekly said in one review, "Carlon is an absolute master of wringing every drop of suspense from a simple phrase or exchange of glances, as good as Alfred Hitchcock at his best." Marilyn Stasio, book reviewer for the New York Times, declared that she was "a writer who is good enough to make up her own rules."

Yet Australian publishers initially rejected her novels, and most of them were first published in England. It would be decades before readers down under would discover and embrace the suspense fiction that defined her.

While still a young child, her family moved to Sydney, where Patricia excelled in school. As a teen she entered a writing contest and won. Her first story was published at the age of 17.  More stories followed, and she wrote several romance novels under various pen names. She then turned her attention to mystery and produced 14 crime novels in the 60s and early 70s, including Hush, It's A Game, The Unquiet Night and Crime of Silence. Despite the passage of several decades, her style of writing is so compact, the settings so familiar, they could have been published last week.

It was during a trip to England that she was discovered by Laura Hruska, editor at Soho Press, who happened to come across her novels in a London bookstore. Soho published many of her mystery novels in the late 90s and they quickly garnered excellent reviews. Not long afterward, Michael Heyward of Text Publishing, while visiting the Soho Press office in NYC, picked up one of Carlon's books and decided to bring her back to Australia. Patricia Carlon had finally come full circle. With the  publication in Australia of some of her best fiction, she finally got the attention she had sought for forty years.

Susan Wyndham, literary editor at the Sydney Morning Herald, had this to say about Patricia Carlon:

"When Text Publishing reissued Carlon's novels Crime of Silence and The Unquiet Night in 2002, I was intrigued to learn about a masterful writer I had never heard of. Carlon politely rejected my written requests for an interview but curiosity drove me to her house in suburban Sydney, where she she happened to be sitting on the veranda and fended off my nervous approach by saying, 'I'm so deaf, I can't hear a word you're saying.'

It was only after she died later that year that a nephew contacted me and revealed she had been completely deaf since the age of 11. No one knew because she had guarded her privacy and dealt with her long-time agent and publishers by mail. But the revelation threw light on her chilling stories of claustrophia, isolation, immobilisation and fear, and intensified my admiration for the brave, solitary woman I discovered too late. The books survive her and deserve to be read."

These recurring themes lend incredible power to her writing. Characters often struggle to recognize danger until it is too late, and their efforts to alert others to their predicament are often ignored or misunderstood. This makes her suspense fiction especially frightening, yet her novels never resort to extreme violence or gimmicks to hook the reader. 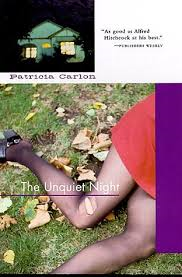 My review of her novel, The Unquiet Night, appeared on the blog The Rapsheet, as part of its ongoing series, The Book You Have To Read. It's also on my list of 101 Things To Do Before You Die (For Crime Writers).

You can read her obituary from the Sydney Morning Herald to learn more about her.

Then read her books, and be amazed.

Special thanks to Susan Wyndham, whose insights and articles contributed greatly to this blog post.
Posted by Picks by Pat at 2:14 AM

Wow--wonderful new-to-me recommendation, and from someone I trust. Thank you, Patrick, for sounding the cry! I hope Ms. Carlon is somewhere where words are flowing and great books are always being read.