Flowers In The Attic Returns to Television 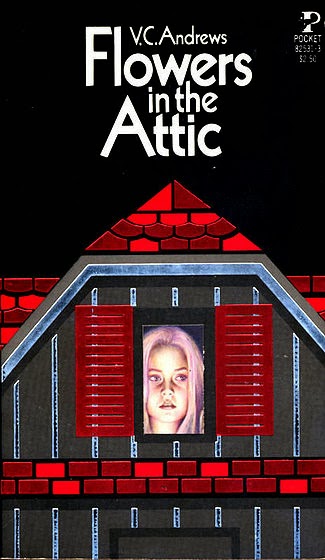 When V.C. Andrews wrote her novel, Flowers In The Attic, there were few hints that it would become a cult classic with readers around the world. The shocking themes of  child abuse and incest were unknown in teen horror novels at the time. It's popularity has a lot to do with the pains of adolescence, as teens, particularly girls, struggled with new feelings as they grew into adulthood. And who can't sympathize with children locked in an attic by a cruel grandmother? The storyline could have come from the Brothers Grimm (and it some variations, it does).

Quite a number of writers who are publishing today have mentioned the strong impact this novel had on them, including Megan Abbott and Sarah Weinman.

Despite its popularity with readers and writers, acclaim has not been universal among the critics.  A reviewer for the Washington Post described the novel as "deranged swill", and a television review in Slate magazine describes the upcoming Lifetime movie remake as "smut for pubescent girls".

The new movie version of the novel premieres tonight on the Lifetime Channel at 8 PM EST. Click here to read an interview with Megan Abbott on the new movie and how the original novel influenced her.

A historian has made an incredible once in a century discovery in England. Professor Nora Crook stumbled across a cache of never before seen letters written by Mary Shelly, the author of Frankenstein. In the letters, Ms. Shelly talks about her son, current events and family. The intimate letters help round out the portrait of the author, but do not touch on her famous novel. The later letters show the progress of a brain tumor that ultimately killed her, as the handwriting deteriorates, and she apologies for memory lapses. You can read more about this remarkable discovery at The Guardian.

Even if you already made your New Year's resolutions, it never hurts to see what other writers have on their list. Probably the best compilation I've seen comes from J. A. Konrath, author of numerous novels of terror and the famous Jack Daniels detective series.  His books are laugh out loud funny page turners. Every year he posts his resolutions, and the list continues to grow. You can review it on his blog, A Newbie's Guide to Publishing. It's well worth the time. I know a good resolution when I steal...uh, see one.

And when you're done with that list, find out if you're really a true fan of this writer by taking the Konrath Quiz!
Posted by Picks by Pat at 5:03 PM