2013 saw the departure of some truly fine mystery and thriller writers. Fortunately, they have left us a great legacy...their words and stories.

Robert Barnard, award winning British crime writer.  He wrote dozens of novels, most of them cozies. His work was described as maliciously funny and he poked fun at hypocrites and snobs in his writing. He explained his view towards his characters by stating, “All my characters are pretty awful in one way or another, partly because they are suspects in a murder investigation and I don’t really believe that nice people are potential committers of murder.”

In 2003 he was given the Cartier Diamond Award for Lifetime Achievement by the Crime Writers Association. 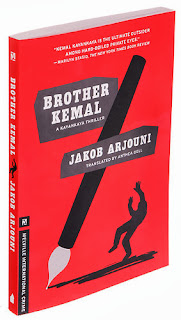 Jakob Arjouni, German crime writer who wrote a popular series featuring a German-Turk private eye. Most of his books were set in Frankfort's underworld. He was one of the first German mystery writers to reach international popularity in the post World War II era. At the time he started writing, private eye novels were practically unknown in Germany. He credited his hard boiled style to formative years hanging out in a pool hall, and also reading Red Harvest, by Dashiell Hammett, at the age of 12.

His last novel, Brother Kemal, was published just before his death.


Barbara Mertz (aka Barbara Michaels), known for her historical mysteries and extensive knowledge of ancient Egypt, she wrote over 50 novels and two scholarly works on ancient Egypt. She had a doctorate in Egyptology but could not find work in the academic world. She then turned to fiction and wrote about the ancient world she loved.

Tom Clancy, author of military and spy thrillers featuring Jack Ryan. His books have sold over 100 million copies. The debut novel, The Hunt For Red October, was so accurate and realistic that when the Secretary of the Navy read it, he demanded to know who had cleared the release of classified information. Yet Clancy peppered his novel with public information available at libraries and his own imagination.

Vince Flynn, who wrote a popular series of terrorist thrillers. His protagonist, Mitch Rapp, battled corrupt politicians, nuclear terrorists and oil-rich bounty hunters. Like Tom Clancy, he tried military service, but medical problems kept him a civilian. His writing was partly motivated by it.

Jack Vance, prolific writer of mystery, science fiction and fantasy. He wrote 11 mysteries under his full name and two others under the pen name Ellery Queen. The Science Fiction and Fantasy Writers of America made him a Grand Master in 1997.

Elmore Leonard, mystery writer of such classics as Get Shorty and Fifty-Two Pickup. He began by writing westerns, and one of his first stories, 3:10 To Yuma, was made into a movie not once, but twice. He was named a Grand Master by the Mystery Writers of America and won a Peabody Award, as well the 2012 Medal for Distinguished Contribution to American Letters in recognition of his fiction by the National Book Foundation.