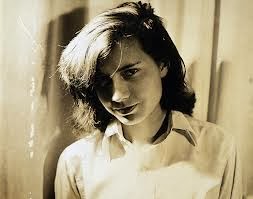 It's the birthday of Patricia Highsmith, born January 19, 1921 in Fort Worth, Texas. She resented being categorized as a crime novelist. Although most of her stories involve a crime, psychological thriller may be more accurate in describing her work. A common theme involves the fate of average men and women thrust into circumstances that require desperate measures to survive. Many of her characters were amoral figures who ultimately escape punishment and even thrive, despite their crimes. In this regard, her fiction can be considered more honest and realistic than many popular mystery and detective novels, and thus far more disturbing.

She had an unhappy childhood, shuffled between her home and life with her grandmother. She once wrote in a notebook, "One situation—one alone, could drive me to murder: family life, togetherness." Despite numerous relationships, she never married (partly because she couldn't, more likely because she wouldn't) and was not overly fond of children. "“I am married to my mother", she once said. "I shall never wed another."

After graduating from Barnard College she lived in Greenwich Village while writing. (Click here to see an interactive map of her neighborhood.) Her first novel, Strangers on a Train was published in 1950 to good reviews and after Hitchcock made a film version, Highsmith's reputation soared. The plot centers around two strangers, Guy Haines and Charles Bruno, who met through a chance encounter and casually discuss people they'd like to see dead. One of the men, Bruno, follows through on this and kills Guy's wife. He then pressures Guy to uphold his end of the bargain by killing Bruno's father. Threats and blackmail soon follow and the pressure builds as Bruno's obsession and Guy's guilt threaten to destroy them both.

More novels followed including The Talented Mr. Ripley, and several of them were adapted for the screen. She also wrote short stories. You can read a review of one of my favorite Highsmith collections on the Friday Forgotten Books List (inspired by Patti Abbott), The Animal Lover's Book of Beastly Murder.

Patricia Highsmith moved to England and France before settling in Switzerland. She died in 1995. You can read an excerpt from Joan Schenkar's excellent biography, The Talented Miss Highsmith, in which she prints one of the many lists the writer was fond of creating, called Little Crimes For Little Tots (example, 'Replacing roller skate on stairs, once mother has removed it'). You can also listen to an audio lecture on Patricia Highsmith, given at the Greenwich Village Society For Historic Preservation.

Of course, you could also read her books. I think she'd be pleased.
Posted by Picks by Pat at 3:47 PM