It's the birthday of Hector Hugh Munro, born December 18, 1870 in Burma, son of a policeman. He wrote popular short stories which combined satire with the bizarre under the pen name, Saki (taken from a Persian poem, meaning "cup-bearer"). 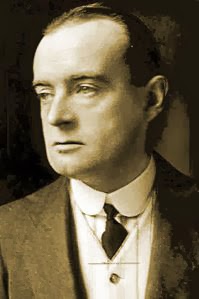 At the age of two, his mother was killed in an accident involving a runaway cow. He was sent to live in England with two aunts whose use of corporal punishment and strict rules inspired much of his writing.

He returned to Burma in his 20s and was a policeman, but poor health forced him back to England. After returning, he started a career as a journalist and began publishing his stories. His tales satirized the hypocrisy of the Edwardian society around him. Many of the best stories are still anthologized today, including Sredni Vashtar  and Tobermory. The Open Window is a classic tale using humor and the macabre to describe a nervous guest at a country estate and his young mischievous hostess. The surprise ending shocks the reader even today.

Although he was 44 years old and exempt from military service, he volunteered for duty when World War I broke out and was sent to France. He was promoted to Lance Corporal and served with distinction. Several stories were written while he was in the trenches. He died on the front on November 16, 1916.

In an ironic twist that could have come from one of his own stories, he was killed by a german sniper after barking an order at a soldier whose smoking risked revealing their position. His last words were, "Put that damned cigarette out!".
Posted by Picks by Pat at 4:13 PM