Here's a headline you don't see everyday, but apparently, a tipping point has been reached. The unusual editorial appeared in the NY Times last week after a rash of bad santas got inebriated, picked fist fights and urinated on neighbors' lawns. Police are blaming the crimes on the annual event known as SantaCon, in which "revelers dress up as Kris Kringle (or, at least, put on a Santa hat) and participate en masse in an often literal bar crawl, cramming 12 nights of Christmas boozing into a single afternoon."

Yeah, that's gonna be trouble. In an effort to tone down the event, NY police lieutenant John Cocchi wrote a letter to bar owners urging them to stop serving any Santa who appears too drunk to crawl into his sleigh without falling out. The organizers of SantaCon have pledged to help by stationing several dozen "helper elves" at the event next year.

Cops in Pennsylvania pulled Santa over on Interstate 80 after observing some suspicious behavior (as if a man driving a sleigh pulled by 8 reindeer wasn't odd enough?). But actually, Santa wasn't in a sleigh. He was in a minivan. No wonder they pulled him over.

Prancer and Dancer were nowhere in sight, but the vehicle did have a bunch of gift wrapped packages. Inside was twenty pounds of marijuana, and now Santa is sitting in the Centre County Correctional Facility. The stash was worth about 160,000 dollars.

That's an awful lot of Christmas cheer. Looks like someone's going to be getting coal in their stockings. Maybe next year, Santa will just spike the egg nog.

The fur is flying up in Canada after a member of Parliament tossed candy canes to the local children from a float during the annual Santa Parade. Dr. Kellie Leitch was told by the president of the Creemore Business Improvement Association that she'd be placed on the naughty list if she didn't stop throwing the candy, and has been banned from next year's festivities.

The BIA president said that kids could get hurt by chasing a piece of candy that might fall under a float, endangering them and he was concerned that the candy would not be picked up once it hit the ground. "Once candy falls on the ground the kids aren’t likely to pick it up and then you have a garbage issue."

I can tell you, that would never be a problem as long as I was there...five second rule, after all. (Actually, my rule extends to five minutes, depending on the situation).

Of course, there's also the safety issue of flying shards of candy cane...she could knock someone's eye out! My solution...safety glasses in the stockings this year.

The Cape Cod Times has reported a shocking crime against Christmas. Vandals destroyed thousands of dollars worth of Christmas displays, including an inflatable Santa, Reindeer and sock monkey. The display by the Thompson family has delighted neighbors for the past 8 years.

Then, like in the animated TV show featuring the Grinch, a miracle happened. "People dropped off Christmas lights, a new inflatable Santa and ornaments. It will become a community display,” Richard Thompson said.

It's good to see neighbors sticking together. As for the real life Grinch, no arrests have been made, but with any luck, they will be hunted down and punished. Force feeding three year old fruitcake comes to mind as an appropriate punishment. 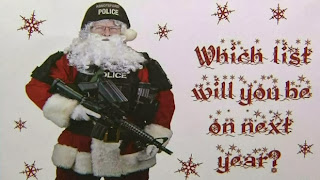 Santa is apparently taking drastic measures to insure that former criminals turn their lives around. In British Columbia, Police Chief Bob Rich dressed as Santa and sent out cards to urge the recipients to get themselves back on the nice list this year. Otherwise, there'll be nothing under the Christmas tree for them. The card says, in part, “I know it’s pretty likely you have had a much more difficult life than most of us. The hard truth is that nothing can be done about that. But it is also true that it is never too late to make a different choice about the rest of your life.” Apparently, it has made a difference to some, as the chief says at least four people have responded positively.


Merry Christmas To You and Yours!﻿
Posted by Picks by Pat at 1:46 PM