It's the birthday of writer Vera Caspary, born November 13, 1899.  From 1927 until her death, she supported herself and her mother entirely from her pen. She published over a dozen novels and numerous short stories, and worked as a highly sought after screenwriter for Hollywood. Universal bought one of her screenplays for 150,000 dollars, with Marilyn Monroe in mind for the lead.

Her reputation was made with the publication of the novel, Laura. It was hailed as the first psycho thriller. Told from multiple points of view, the novel gives the reader a complex portrayal of a successful business woman and her competitive suitors. The combustible mix leads to murder. It was made into a popular movie that has achieved classic status, although it earned Vera very little money. 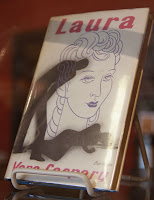 Described as one of the original "Gone Girls" who influenced female mystery writers of the 80s and 90s, her work is receiving fresh attention. Sarah Weinman included a Caspary short story, Sugar and Spice, in her critically acclaimed anthology Troubled Daughters, Twisted Wives. Her most influential novel, Laura, was featured in the groundbreaking Library of America collection, Women Crime Writers: Eight Suspense Novels of the 1940s & 50s. 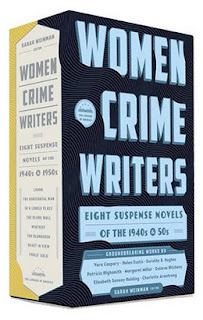 Caspary's fiction portrayed strong, independent women at a time when most wives and girlfriends were expected to support their men and cater to their needs. In her autobiography, Vera expressed delight at having lived during the turbulent changes of the 20th century, when roles for women dramatically expanded due to the Great Depression and World War Two.

So glad to see this, Pat. Thanks. Vera Caspary was a remarkable writer.

How much are they asking for that first edition?

I'll check and let you know!