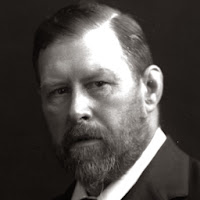 Today is the birthday of Irish writer Bram Stoker, born in Dublin on November 8, 1847. As a sickly child, he spent most of his time in bed, listening to stories told by his mother. He wrote 18 books, and published his first horror story, The Primrose Path, in 1875.

His most famous novel is Dracula, published in 1897. It was not the first piece of fiction to feature vampires, but became the standard by which all subsequent vampire stories are measured, and is considered a masterpiece of the genre. Stoker's main character was originally named Count Wampyr. But he changed it to Dracula after reading that the Romanian translation of Dracula meant "Devil". The story is set in Transylvania and he did research for the geography at the British Museum.

Despite being well received by critics, the novel made little money for Stoker, and he died in poverty. His widow was forced to sell his notes and outline for the novel at auction for just a few dollars.

Stoker wrote the first adaptation of the story for the theater, and Dracula made his first appearance in film in 1922 with Nosferatu.

Over 200 Dracula films have been made, including the 1931 release Dracula, starring Bela Lugosi. It was the first full length supernatural horror film by a Hollywood studio, and newspapers reported that some members of the audience fainted at the horrific scenes. Despite the reports, or perhaps because of them, the movie was a huge success.

Bela Lugosi was not the first choice for the starring role, but eventually was cast after he agreed to a reduced salary. He received only $3,500 for his work.

After the censorship code went into effect in Hollywood, some of the scenes were cut from the movie because they were either considered too intense or due to fears that religious groups would object. As recently as 1994, the novel was removed from a required reading list for senior students at a high school in Lewisville, Texas because of "sexual references".

Bram Stoker continued to write horror and science fiction until his death in 1912. Other works of note include The Lair of the White Worm and The Jewel of Seven Stars. The Horror Writers Association has a coveted award named after him, the Bram Stoker Award. Some of the most famous winners of the award include Thomas Harris, Peter Straub and Stephen King.
Posted by Picks by Pat at 7:27 AM