It's the birthday of Louisa May Alcott, born November 29, 1832. She is best remembered as the author of popular novels depicting domestic bliss, like Little Women and Jo's Boys. These stories brought her the financial success she had struggled to find her whole life. 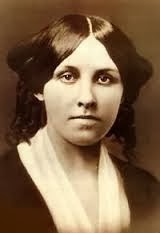 But Louisa May Alcott had a secret life, a dark side. Under pen names like A.M. Barnard, she wrote Gothic thrillers which featured strong, independent women bent on revenge and murder. Recurring themes in these stories of "blood and thunder" as she called them, include madness, infidelity, drug abuse and obsessive love. One of these tales was considered so scandalous that her editor refused to print it, and it sat undiscovered among her papers until 1993. It was finally published in 1995 as A Long Fatal Love Chase.

She was raised in Concord, Massachusetts, where she counted among her friends and educators such esteemed philosophers as Ralph Waldo Emerson and Henry David Thoreau. But the family lived in grinding poverty, and by the age of 15 she was determined to work at anything to earn money...a seamstress, servant, teacher. During the Civil War she went to Washington, D.C and worked as a nurse. Typhoid fever forced her to return home.

Six years before the success of Little Women, she entered a contest and won first prize, 100 dollars. The story, Pauline's Passion and Punishment, was published anonymously and was the first of several thrillers that supported her and her family. It wasn't until the 1940s that literary scholars discovered that these thrillers had been penned by Alcott.

After the success of Little Women, Alcott found herself constantly in the public spotlight. The attention made it impossible for her to continue writing the thrillers that she loved. Despite her liberal upbringing, 19th century conventions and her father's influence dominated her actions.

"I think my natural ambition is for the lurid style. I indulge in gorgeous fancies and wish that I dared inscribe them upon my pages and set them before the public. And what would my own good father think of me...if I set folks to doing the things I have a longing to see my people do? No, my dear, I shall always be a wretched victim to the respectable traditions of Concord."

Behind a Mask: The Unknown Thrillers of Louisa May Alcott
---Madeleine Stern, editor﻿

When I first got my Kindle, I downloaded a huge collection of Louisa May Alcott's works (free or almost), so I finally got to read some of those Gothic tales I'd been hearing about my whole life as well as Hospital Sketches and a very lively account of her travels abroad. The "scandalous" stuff, I'm sorry to say, was terrible: overwritten and in my opinion unconvincing at least in part because the author knew nothing about sex, or so I believe. I still think Louisa was an extraordinary woman and Little Women the Great American Novel, but the writings feminists and fans of dark literature have been so excited about are a far cry from her best work.

Agreed, it doesn't ring true for me either but in the day it paid the bills and she seemed to enjoy it. The "scandal" I suppose was that her fans of the day would never have suspected she wrote potboilers. The funny thing is she didn't work that hard to keep it a secret! She drops hints all over the place in Little Women. And her family knew about it.

I blog about Louisa if you'd like to read more: www.louisamayalcottismypassion.com